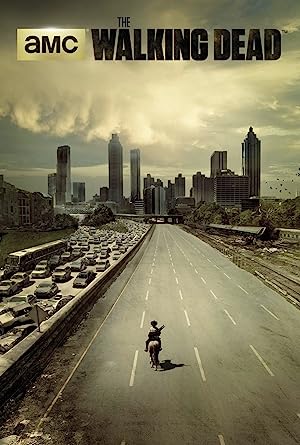 Rick Grimes is a former Sheriff’s deputy who has been in a coma for several months after being shot while on duty. When he awakens he discovers that the world has been ravished by a zombie epidemic of apocalyptic proportions, and that he seems to be the only person still alive.

After returning home to discover his wife and son missing, he runs into survivors Morgan and his son; who teach him the ropes of the new world. He then heads for Atlanta to search for his family. Narrowly escaping death at the hands of the zombies on arrival in Atlanta he is aided by another survivor, Glenn, who takes Rick to a camp outside the town.

There Rick finds his wife Lori and his son, Carl, along with his partner/best friend Shane and a small group of survivors who struggle to fend off the zombie hordes; as well as competing with other surviving groups who are prepared to do whatever it takes to survive in this harsh new world.

Season six sees a couple of slower stretches, the first as the season kicks off in an episode that, for a good thirty minutes, is more disorienting than it is engaging, even with the black-and-white flashbacks that help distinguish timelines, but still paint a rather clouded picture.

The other comes when the season’s first half story arc settles and the second commences, though the lead-up to the season finale makes for some of the more intense Walking Dead entertainment yet. The “slower” — read: less hacking and slashing and running, more reflection and dramatic construction — stretches are critical to character and universe expansion, and do yield what is quite possibly the finest hour of The Walking Dead in this, or any, season in “Here’s Not Here.”

The episode drives to the heart of what the show is all about: maintaining humanity in the presence of incessant death and darkness, both in the world around and fomenting deep within each survivors’ soul. The episode follows Morgan as he learns Aikido but, more, learns who he is, and who he needs to be, in the new world. The episode paints a very clear, distinct, summarizing picture of everything the show is about.

It’s beautifully acted, touchingly punctuated, and a pleasure in the middle of a rather dark season that, at least for its first half, leans more to being about “man vs. zombie” than “man vs. man,” the latter of which is more central to the sum total of the series experience than the plot-driving and theme-facilitating walkers.