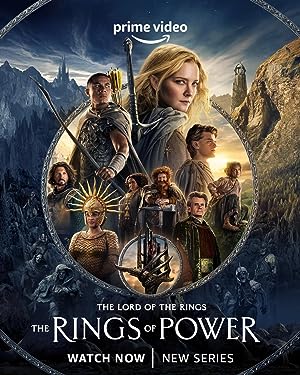 The Lord of the Rings: The Rings of Power (2022–)
N/A|Action, Adventure, Drama|01 Sep 2022
6.9Rating: 6.9 / 10 from 315,067 usersMetascore: N/A
Epic drama set thousands of years before the events of J.R.R. Tolkien's 'The Hobbit' and 'The Lord of the Rings' follows an ensemble cast of characters, both familiar and new, as they confront the long-feared re-emergence of evil ...
Creator: Patrick McKay, John D. Payne
Actors: Morfydd Clark, Ismael Cruz Cordova, Charlie Vickers

After the young Galadriel (Amelie Child Villiers) creates an origami-style boat which floats down the river and demonstrates her unique talents with the craft, since it can move, we’re told the backstory about how the great Foe Morgoth destroyed the light of their home, and they resisted… which translates as running off to Middle-Earth. A huge battle ensued, Morgoth was killed, thousands of people were slaughtered, blah blah blah…

As such, Sauron took the big baddie’s place, and Galadriel’s brother wanted to take him out, but… yep, guess how well that one went.

Now, if I followed things properly – and I might not have done – they all headed off to Forodwaith after many centuries, and so I don’t understand how Galadriel (Morfydd Clark, in adult form, who’s also been in Crawl and 2020’s Dracula series) is still alive at that point, but then it’s fantasy fiction, so don’t try to take it seriously.

Like the average Star Wars movie, the ‘action’ moves from place to place quite frequently, but this lot eventually find what they’re looking for, even though the dialogue always sounds like they’re talking in riddles, which does get annoying after a while.

Meanwhile, in episode 2, Nori (Markella Kavenagh) becomes engrossed in the ‘giant’ who’s come to their town to stay for a while… I say ‘giant’, because he’s bigger than anyone in this world.

Add in a load more location-hopping, and along the way, there’s clearly a spark between Arondir (Ismael Cruz Cordova) and Bronwyn (Nazanin Boniadi), while Robert Aramayo – as Elrond – acts like an even more miserable Colin Firth, a bunch of strong – and faked – Manchester and Yorkshire accents, a trip on a ship, and I had absolutely no idea what was going on.

It looks great – and in the opener, it’s 17 minutes before we get the opening title, since there’s a huge Orc to be battled and defeated!, but once you’ve seen one oversized Lake District with multiple lakes falling down the sides of mountains – all with a drone flying overhead to capture the motion – you’ve seen them all.

While I loved all the Hobbit films, I understand that for this series, their director, Peter Jackson, wasn’t even consulted for this, which comes across as a big mistake. I understand that since the well of this story has been dredged fairly dry already, The Lord of the Rings: Rings of Power is taken from the appendicies, rather than the meat of the books.

So far, just the first two episodes are available, with new ones coming out weekly thereafter. It’s visually impressive, but the plotting is a bit dull and it drags, with leaden acting. It’s mostly endless plot exposition, and could do with some decent humour added in… well, SOME humour added in! Everyone looks all po-faced and serious! In fact, this really needed Peter Jackson’s touch, but I guess it’s too late now.

It certainly had his type of budget, since that is expected to run to $1bn for five seasons. Still, whatever the true figure in the end, it’s Mickey Mouse numbers at this point.

The episodes were not available for review prior to launch. For reasons best known to them, access was restricted to big sites and ‘influencers’ with goatees and shouty voices. I’ve been reviewing films and TV shows for over 28 years, and I’d bet my energy bill that the reviews on DVDfever.co.uk have more care and love and attention put into them than any of them, but that doesn’t count for anything, it seems.

Then again, given the price tag, perhaps they only wanted guaranted ‘yes men’ to review it, so they could control the narrative? That won’t help, since as I type, the series so far only has 6/10 on IMDB, which is very poor for the money spent on this.

The Lord of the Rings: Rings of Power is on Prime Video now, with two episodes in the first week, and the remaining six being put out weekly.

The Lord of the Rings: The Rings of Power S01E01 – A Shadow of the Past

Galadriel is disturbed by signs of an ancient evil’s return. Arondir makes an unsettling discovery. Elrond is presented with an intriguing new venture. Nori breaks a deeply held community rule.

GoogleDrive Mega Dood More Link
The Lord of the Rings: The Rings of Power S01E03 Adar

Arondir finds himself a captive. Galadriel and Halbrand explore a legendary kingdom. Elendil is given a new assignment. Nori faces the consequences.

S01E04 The Great Wave
Queen Regent Míriel’s faith is tested. Isildur finds himself at a crossroads. Elrond uncovers a secret. Arondir is given an ultimatum. Theo disobeys Bronwyn.

S01E05 Partings
Nori questions her instincts; Elrond struggles to stay true to his oath; Halbrand weighs his destiny; The Southlanders brace for attack.

Streaming The Lord of the Rings: The Rings of Power