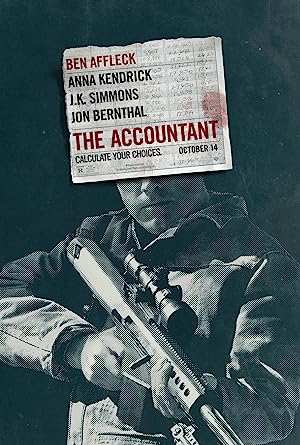 Christian Wolff is a math savant with more affinity for numbers than people. Behind the cover of a small-town CPA office, he works as a freelance accountant for some of the world’s most dangerous criminal organizations. With the Treasury Department’s Crime Enforcement Division, run by Ray King, starting to close in, Christian takes on a legitimate client: a state-of-the-art robotics company where an accounting clerk has discovered a discrepancy involving millions of dollars. But as Christian uncooks the books and gets closer to the truth, it is the body count that starts to rise.

Perhaps on a quest to establish his own series of actioners, Ben Affleck settles into a version of “The Bourne Identity” with “The Accountant,” matching colleague Matt Damon in icy stares and blunt hand-to-hand combat. While the feature doesn’t quite have the same globetrotting expanse as the Damon franchise, it shares a similar interest in character, taking on an almost obsessive need to get to the bottom of everyone on screen, even if the picture doesn’t need the explanations. “The Accountant” is a slow-burn thriller with plenty of detail, but it’s not a creation that stirs up the senses, with director Gavin O’Connor crafting only a passably interesting puzzle aided considerably by the cast. It’s a bruiser, no doubt, but not always as engrossing as it could be.

As a young boy, Christian (Ben Affleck) was diagnosed with High Functioning Autism, only to be refused therapy by his military father, who believed in experience, not education. With a gift for numbers, Christian becomes an accountant, but one who lives a migratory life by himself, seemingly helping clients as he keeps command over his secret home. Christian’s reality is far more dangerous, playing middleman for leaders who need their finances straightened, ultimately hired by robotics tycoon, Lamar (John Lithgow). While standoffish, Christian finds friendliness in Dana (Anna Kendrick), but their introduction is cut short when she’s targeted for assassination, opening her eyes to the accountant’s true employment as a war machine, working his way through corruption to even the score. On his trail is Treasury Director King (J.K. Simmons), who works cautiously, tasking new hire Medina (Cynthia Addai-Robinson) to learn everything she can about the shadowy man.

The screenplay by Bill Dubuque (“The Judge”) unfolds much like a novel, taking an askew approach to the exploration of Christian’s mission. In fact, it doesn’t really show much interest in the titular question mark during the first act, instead tracking Medina’s entrance into the Treasury Department, where’s she busted trying to cover up a sealed criminal case by King, who responds with a job offer, showing faith in the woman’s intelligence and disdain for injustice. There’s a brief introduction with Christian as a boy, with his father pulling him away from a potentially life-changing stay as a therapy center, where his autism could be explored in full. Instead, he’s raised with a bitter sense of self-reliance, watching his mother and sibling fade into the background as he follows in his father’s footsteps.

Christian is withdrawn, and “The Accountant” gets a lot of mileage out of his isolation, visiting his fortified trailer, where he keeps cash, his arsenal, and an original Jackson Pollock painting. He has a home as well, using strobe lights and heavy metal to calm himself for bedtime, but Christian harbors deeper secrets, forcing Medina to study photographs and histories while King struggles with his own hidden agenda. Dana is more of a ray of light for Christian, with her daffy personality penetrating his defenses, making a tender connection with a man she believes is simply an accountant. Also in the mix is Braxton (Jon Bernthal), a hotshot personal security officer who weaves in and out of Christian’s mission. There are several characters to manage, and Dubuque gives them all some serious attention. It’s admirable to reach this far, but not every participant in the chase is all that interesting, finding Medina’s subplot lacking in revelations, and King’s true motivation isn’t revealed until the final act, delivered with a lengthy monologue that’s intended to resemble explain-it-all illumination, but it stops the movie cold. O’Connor isn’t one to commit to a brisk pace, leaving “The Accountant” with dry periods, going deep with personalities that don’t have all the much to share.

Violence breaks the inertia of “The Accountant,” watching Christian dominate enemies with supreme firepower and martial arts, though O’Connor isn’t trained for action, offering uninspired coverage for what appears to be intricate choreography. There are secrets revealed in the final act as well, including a twist that isn’t nearly as shocking as O’Connor imagines. “The Accountant” doesn’t offer thrilling closure or suspense, but with Affleck and Simmons around, individual flavors register as intended, creating an intriguing but ultimately unsatisfying adventure with an unusual protagonist. The production deserves credit for expanding on clichés, but all the dramatic expansion eventually gums up the works.