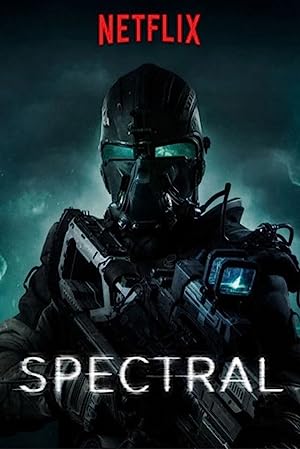 When a mysterious force kills some of the world’s most powerful soldiers, Dr. Clyne (James Badge Dale), who’s among the top in his field, is sent to Europe by the government in order to discover what the disturbance might be. Joined by a special ops team, they discover that it’s an invisible, seemingly unstoppable ghost-like force, one that can smash through walls and kill an army in an instant by simultaneously freezing and burning the body. The odds are against them, but they regain hope upon discovering that the mysterious species isn’t as invincible as it seems.

When it comes to their original television, Netflix is killing it. Whether it’s House of Cards or BoJack Horseman, the streaming site has continued to provide astounding, award-winning television on a near monthly basis. If only their original movies stood as high. While they’ve acquired some noteworthy features, including Beasts of No Nation and The Little Prince, the films they’ve produced themselves from the ground-up continuously fail to live up to their impeccable television standards. While it’s encouraging to see them venture into the sci-fi genre with Spectral, unfortunately, it doesn’t fare much better as it’s yet another rousing disappointment for the multi-platform company.

The filmmaking debut of commercial director Nic Mathieu, Spectral is a sci-fi action/thriller in the vein of District 9, Aliens and Hollow Man. Unfortunately, it’ll earn more comparisons to Skyline, because for as nice as it looks in the visual department, there’s very little weight holding it all together. The writing feels empty and flat at every turn, and the same can be said for a majority of the performances.

Dependable character actors like Bruce Greenwood, Emily Mortimer and Stephen Root, along with the exceptionally promising young child actor Ursula Parker (Louie), do all they can to liven up this dreary, rubble-filled, war-heavy, gun-friendly man vs. supernatural entity tale. Unfortunately, the repetitive action, stark-to-a-fault dialogue, mostly humorless tone, typically lifeless presentation and bland performances from Dale, Clayne Crawford, Max Martini and Cory Hardrict, not to mention the political commentary that is as subtle as a kick in the face by a bull, hinder any success Spectral might hold.

Often, Netflix’s original productions look too clean for comfort. They’re glossed and gleamed to their determent, meant to highlight the 4K presentation, but often absorbing or wiping away all the grit and grime needed to make something as deadpan, down-to-the-ground serious as Spectral feel authentic or visceral. Mathieu needs to convey a sense of honesty admist the chaos and debris. That’s not often found here, however. Everything isn’t necessarily super, duper shiny per se, but it lacks the palpability needed to really make it feel as real and intimate as it should be. There’s no shortage of dirt on-screen here, and yet, it lacks that texture that it needs to succeed.

With Netflix footing the bill, in association with Legendary Pictures, it does avoid the trepidation to fill the cast with A-list stars or high-profile celebrities in order to get the audiences into the theatre. In fact, while it’s littered with cliches and tired tropes, it’s nice to see the company produce an original big-budget sci-fi adventure (in the sense that it’s not based on a pre-existent IP) in a time when other studios simply refuse to do so unless, again, it’s filled with celebrities. But at the same time, their streaming site-exclusive release refuses viewers the ability to marvel at the film’s scope, size and scale, which is admittedly pretty impressive for first-time director Mathieu. But no matter how big or small the screen, that doesn’t excuse a movie this uniformly dull and actively drab.

2017 will almost unquestionably result in Netflix’s first truly good original film production. I know it. With Duncan Jones’s Mute, Boon Joon-ho’s Okja and David Michod’s War Machine among those set for release in the next year, it’s safe to assume they’re on the path towards excellence with their features, just as they already are with their TV shows. Unfortunately, this is not a step in the right direction just yet. Frustratingly tedious and incessantly wearisome, Mathieu, like Joseph Kosinski and his directorial debut TRON: Legacy, shows exceptional promise when it comes to his visuals, but his storytelling could use some fine tuning. This Spectral won’t be haunting anyone any time soon.