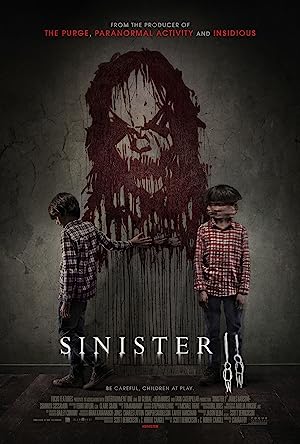 Courtney (Shannyn Sossamon) and her twin sons Dylan (Robert Sloan) and Zach (Dartanian Sloan) have fled her abusive husband and are holed up in an old country home where, she hopes, nobody will find them. She’s paranoid, believing that everyone and everything is out to get her, that her husband will find them and reassert his harmful ways over the family. When Courtney is approached by Deputy So-and-So (James Ransone), still working on the case of the demon Bughuul and fearful that her house is one of his targets, she shuts him out. But he proves his worth in several ways and quickly becomes a surrogate father figure to the boys. Meanwhile, Dylan is receiving nightly visits from children-ghosts, including the manipulative Milo (Lucas Jade Zumann), who are forcing him to watch snuff films in the basement, promising that the more he watches, the fewer bad dreams he’ll have. Zach comes to odds with his brother over the ghosts’ attention and helps set in motion a terrible plan that could destroy the family.

Whatever happened to the Oswalts is only going to happen again. It’s a question of when and where.

When? Now. Where? Right here in Sinister 2, Director Ciarán Foy’s (Citadel) follow-up to 2012’s Horror hit Sinister. Though lagging behind the original in terms of chilling scares, good pacing, and creativity, this sequel proves only serviceably entertaining, and best, and if only in a wholly generic sort of way. It may as well be watermarked with “obligatory Horror sequel” on every frame, though, because that’s exactly what it is. Foy and Writers Scott Derrickson and C. Robert Cargill, the latter of whom return to work from the original, carve out a typically mundane genre film that scrapes by with a core that will be familiar to fans of the first but a story that’s not as engaging and a mood that’s not as, well, sinister. A few cheap jump scares intermix with some chilling home movies and halfway likable characters for a film that probably didn’t need to be made but that, at the very least, offers fans of the original an opportunity to return to the world.

Sinister 2 occasionally falls into the “jump scares” trap — those cringe-worthy moments when, suddenly, ah! a freaky image appears on the screen accompanied by, double ah!, a sharp, loud musical cue — that don’t work anymore on anyone who has seen more than one Horror movie made in the 21st century, but for the most part the movie aims for more legitimate, story-driven scares than it does cheap thrills. Granted, its interwoven plot chills don’t work very well, either, but they’re serviceably scary more so considering the involvement of children and old, gritty, drive-in quality Super 8 film footage that plays in a dark, dank basement than the actual cues themselves. The film suffers from some bland supportive story details, raised by the return of the (now ex) Deputy So-and-So and lessened by an out-of-place family dynamic about an abusive father who wants his family back. But that broken family angle is really nothing more than a necessary evil, a plot driver that gives the family a vulnerability to the evils that lurk in its new digs.

Much of the problem with Sinister 2 is that it could be condensed to half the runtime and work better than it does at a full 90-some minutes. Much if it is made of filler, not the least of which stems from the “abusive father angle,” and some repetitive scenes of Dylan watching various “scary movies.” That said, the film benefits from some solid technical craftsmanship. Foy squeezes quite a few visual delights from his relatively simple canvas, getting the most out of several key locations, notably the basement. He makes the film watchable, if not pleasurable in a few spots, a minor miracle considering the dearth of significant material at his disposal in a fairly straightforward script. The film benefits most, however, from simply continuing on with the lore, which isn’t particularly interesting but that does a fair enough job of mixing up a few creepy notes along the way. Essentially, Sinister 2 boils down to a “no harm, no foul” sort of endeavor. It’s not a film many people would miss if it didn’t exist, but as a straightforward sequel to a modern Horror flick, things could be worse. Credit Foy and the cast for most of the good work here and blame sequel-itis and a thoughtless script for the rest.