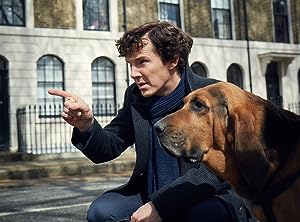 Sherlock waits to see where Moriarty will make his posthumous move. One mysterious case in particular baffles Scotland Yard – but Sherlock is more interested in a seemingly-trivial detail. Why is someone destroying images of the late Prime Minister Margaret Thatcher? Is there a madman on the loose? Or is there a much darker purpose at work? Something with its roots deep in Mary Watson’s past.

Christmas may have been a week ago but we are still getting the gift of a new season of Sherlock. This incarnation, featuring Benedict Cumberbatch and Martin Freeman as Sherlock Holmes and Dr. John Watson respectively, starting its fourth season, is usually 3 episodes long and comes about every few years (quality over quantity) and has always been eagerly anticipated by fans such as myself

The Abominable Bride aside, the last episode ended on quite the cliffhanger. Is Moriarty really dead and what are his plans for Sherlock and the gang? This episode didn’t really address that but his presence still loomed large which did not seem to worry Sherlock as much as the other people around him. He was sure that something was coming for him eventually and just tried to distract himself by taking meaningless case after meaningless case just to pass the time.

What’s different now is that Mary has now given birth to a daughter. From there, they were faced with the usual growing pains involved with taking care of a baby. Sherlock’s distractedness caused him to be oblivious of everything around them while incessantly texting over the course of solving these nothing cases.

This brings us to the big case of the episode, “The Six Thatchers”. It technically wasn’t as much about that as it was about something else later on. Lestrade called upon Sherlock and Watson on a case about a young man who was supposed to be on a trip to Tibet dead in his car in his parents’ driveway. The case was some pretty standard stuff which Sherlock easily solved but there was one thing that just didn’t sit right with him. The house had a shrine full of Margaret Thatcher items that Sherlock perceived to be slightly disturbed.

We then figure out that the parents had a bust of Thatcher that was destroyed during a robbery. Sherlock found it odd and that there had to be something more behind this and that maybe it was a subtle message from Moriarty. We later learn of other crimes committed while attempting to steal more Thatcher busts. Sherlock finds a connection between these busts (six of them) and is able to anticipate the next attempted robbery. There we learn the real importance of the busts and it was Mary’s past as a mercenary. He calls upon Mycroft but he already knew about it. They work together to try and uncover the truth.

The episode was kind of exciting up to that point but started to fall apart from there. When we thought we were done with Mary’s past, it all comes streaming back. To sum it all up, one of Mary’s teammates felt betrayed after an operation that went wrong six years prior and wants his revenge. The reason he was destroying the busts was because he managed to hide a flash drive in one of them (similar to what Mary gave Watson earlier). We are then told a convoluted story of that operation and how it went wrong.

From then on, it felt like a different episode as Mary went on her own to try and solve her problems on her own, utilizing all the tricks she knew from her past. This was kind of fun to watch but it inevitably didn’t last long as Sherlock and Watson were able to catch up to her. They tried to talk her out of it and convince her to come back to London before being interrupted by the man who wanted to kill her. They manage to learn more about the failed operation and who betrayed them.

Watson was not okay with being lied to by Mary which felt forced since he didn’t want to know about her past in the first place and on the plane ride back to London, we see Watson begin to wander when he develops a relationship with a woman he met on the bus. Watson immediately realizes that it wasn’t a good idea and calls it off.

Mycroft is working behind the scenes and Sherlock, as he often did, figures everything out and confronts the real culprit. He figures them out like he always does and Mary and Watson show up. They manage to surprise Sherlock which ends in tragedy for Mary. Watson is upset and so is Sherlock as he feels partially responsible because he made a vow to protect them.

Watson seemingly wants nothing to do with Sherlock while he takes a look at himself and starts to realize the error of his ways and how his behavior affects people, telling Mrs. Hudson to warn him if he goes too far. As a last request, Mary tells Sherlock to save Watson.

Overall, the story may not have been there and the Watson and Mary subplot felt a little forced but this was still a Sherlock episode, full of Sherlock’s usual antics and fun one-liners. The chemistry between Cumberbatch and Freeman was on full display. It will be interesting to see how their relationship recovers after the events of this episode but they’ll get back together eventually to handle whatever Moriarty has planned, alive or not.