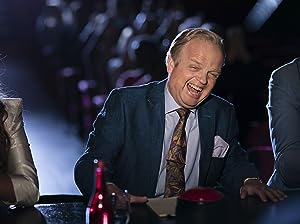 The Lying Detective (2017)
89 min|Crime, Drama, Mystery, Thriller|08 Jan 2017
9.2Rating: 9.2 / 10 from 25658 usersMetascore: N/A
Sherlock goes up against the powerful and seemingly unassailable Culverton Smith - a man with a very dark secret indeed.
Director: Nick Hurran
Creator: Steven Moffat, Steven Moffat (created by), Mark Gatiss (created by), Arthur Conan Doyle (based on the works of)
Actors: Benedict Cumberbatch, Martin Freeman, Una Stubbs, Rupert Graves
As Sherlock attempts to comfort John Watson after his wife’s death entrepreneur and apparent philanthropist Culverton Smith tests a new drug on daughter Faith and his employees to make them forget his confession that he is planning to commit murder. Faith has a partial memory and approaches Sherlock to identify a likely victim but her disappearance and his descent into drug-taking lands him in Smith’s hospital and at his mercy. However Sherlock is not as helpless as he appears and has his own way of trapping Smith though the final shock is reserved to Watson as his therapist springs a terrible surprise on him.

There are a surprising amount of things ‘The Lying Detective’ demonstrates well, and one of them is how badly Sherlock needs consistency in terms of depicting its protagonist and his powers of deduction. Directed by Nick Hurran, the episode is a wild, drug-fueled ride through its main character’s narcissistic efforts to get John Watson to like him again and potentially absolve him of any culpability for Mary’s death during last week’s ‘The Six Thatchers.’ By including one twist after another, the story structure itself bleeds into the deliberately jarring visual elements intended to reflect Sherlock’s descent into addiction and his seemingly quixotic quest to be reunited with his friend by bringing down a serial killer who has been hiding in plain sight for years.

And yet, through the emotional desperation and a life-threatening smack habit Sherlock manages to do something that it hasn’t in quite a while: make his deductions (no matter how outlandish they might seem) as fun for the viewer to watch as the show insists it is for him to demonstrate. Hurran uses a number of visual tricks to make Sherlock’s various analyses something more than just a narcissist explaining the plot to characters who don’t process information like he does. To do this, the episode includes a lengthy sequence where it’s genuinely a treat to be in Sherlock’s presence, as he breaks down a multitude of detective-y things to Faith Smith, a woman convinced her father, guest star Toby Jones as Culverton Smith, has killed someone.

Sherlock waives away imagined chalk lines denoting little clues he’s picked up on, and at one point explains how he knows little details about Faith’s life simply by scrutinizing (through sight, smell, taste, and touch) a single piece of paper. Like a number of the detective’s deductions throughout the episode, it borders on supernatural, though that is perhaps the most consistent element ‘The Lying Detective’ shares with the series as a whole.

And as entertaining as it can be to see Sherlock throwing around outlandish deductions to a captive audience (the viewer and Faith… or Euros, but more on that later) with a multitude of visual aids all while telling Mycroft off, it really shouldn’t require a life-threatening drug addiction in order to make Sherlock fun again. Watching Sherlock interact with Faith it’s like the series rediscovered a part of itself that had gone missing amidst the demands of delivering feature-length spectacle three times every few years. It’s thrilling to see, but at the same time it underlines the need for consistency in terms of how the show represents its main character.

That’s especially true given that, at the end of the hour, Gatiss and Moffat introduce the third Holmes sibling they’ve been teasing for some time now – though not as Mycroft and Sherlock’s brother Sherrinford, but a long-lost sister Euros, played by Siân Brooke. But the actual introduction is made far in advance of Euros pointing a gun at John who thinks her to be his therapist and doesn’t notice she’s also the woman he carried on an emotional affair with in the premiere. Brooke also plays the version of Faith Sherlock meets and who puts him on to Culverton Smith’s serial killing ways. It’s all a bit of sleight of hand that in some ways makes the introduction of Euros more satisfying, and in some ways makes it feel like an enormous cheat.