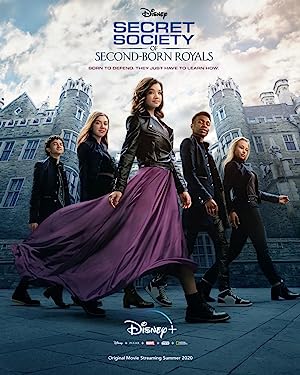 
In the small European country of Illyria, second-born princess Sam (Peyton Elizabeth Lee) prefers to spend her time rocking with her best friend Mike (Noah Lomax) than engaging in any of the affairs of state, much to the chagrin of her mother, Queen Catherine (Elodie Yung), and sister, heir to the throne Princess Eleanor (Ashley Liao).

After a recent act of rebellion lands her in jail, Catherine decides it’s time to send Sam to summer school with a few of her peers to whip her into shape. Imagine Sam’s surprise to learn that not only is summer school not merely higher ed rehabilitation, but that it’s a secret training facility for children like Sam: the second-born royalty from families across the globe who possess special abilities, abilities which have allowed the Secret Society of Second-Born Royalty to protect their respective countries and the rest of the world for generations.

With a new threat hiding in the shadows, it’s not a question of if Sam is worthy of the SSSBR, but whether she can realize she is in time.

The premise of Secret Society is a strange amalgamation of other Disney properties Sky High (2005) and Descendants, their TV movie series, with a dash of Fox’s X-Men: First Class (2011). This should equate to a good time as each offers something unique on the superhero/supervillain tales that have become increasingly popular over the last decade.

In the specific case of Secret Society, you’ve got the rebellious, musically-inclined central character (Descendants) who learns that she attends a school for supers to develop her powers (Sky High) and, in embracing them, learns a valuable life lesson about teamwork (First Class). With these pieces in place, why is Secret Society merely whelming? It’s largely a mixture of strange narrative structure and odd editing that eventually undercuts any of the engaging performances or themes.

For instance, Sam gets an exclusive tour of the SSSBR facilities which implies that there is a large force working under those with abilities. It’s a moment where the veil is truly ripped off for Sam, highlighting just how large of an organization she’s being introduced to and how significant her role as a royal is (a core aspect of struggle for the character).

Except, when the climactic battle is underway, where is everyone? It makes sense within the scope of the larger narrative that Sam and her fellow second-borns will take center stage in order for the narrative to reach its desired conclusion, but there are zero attempts in *any way* to explain where all of the other agents have gone.

Not a single explanation for why this once large force is unable to join in the final battle. Even though director Anna Mastro (Runaways) knows how to stage an action sequence that’s enjoyable to behold, the fact that the narrative goes out of its way to ignore what should be explained while spending *too* much time explaining what is easily predicted from the start is frustrating. This doesn’t even get me started on the logical fallacies present in the execution of getting the main villain worked into the story.

So much of it crumbles under even the slightest press of thought that it becomes frustrating. Ultimately, many of the issues within Secret Society can be explained by the audience the film is clearly aiming for: one less interested in high art and is more focused on casual entertainment.