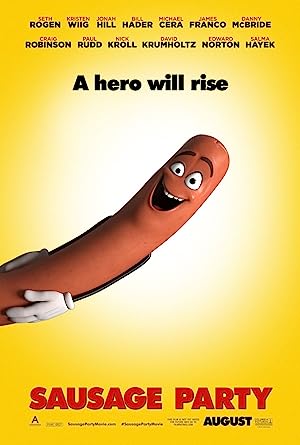 In a supermarket called Shopwell’s, the foods and other grocery items who live there worship the human shoppers as gods who take them to the “Great Beyond” when they are purchased. Among the groceries in the store is a sausage named Frank, who has dreams of living with his hot dog bun girlfriend, Brenda, in the Great Beyond, where they can finally consummate their relationship. Frank lives in a package with his best friends Barry and Carl, who also look forward to life in the Great Beyond.

applaud Seth Rogen and Evan Goldberg for their continued celebration of juvenile humor, with the producing/writing partners trying to keep up with demand through recent releases like “Neighbors” and its sequel, “”The Night Before,” and “The Interview.” “Sausage Party” is perhaps their most direct offering of raunchy mischief, only now their game’s been elevated to the CGI-animated realm, delivering a sweeping adventure (on a low budget) that’s packed with cursing, sexual situations, and gore, all involving supermarket foods.

It takes a special mind to dream up such a fantasia of fluids and puns, and “Sausage Party” is surprisingly ambitious when it comes to thematic reach. However, a little of this berserk creation goes a long way, especially when it feels like the production is running out of ideas to fill 80 minutes of screen time.

At Shopwell’s Supermarket, the aisles are filled with eager food items waiting for their time to be “chosen” by customers and brought to The Great Beyond, where all edibles go to live the rest of their lives in blissful harmony. For Frank (Seth Rogen), a sausage, and Brenda (Kristen Wiig), a hot dog bun, such spiritual liberation finally means they can have sex, joining together as wiener and bread do.

Learning they’ve been misled in their beliefs, Frank and Brenda are violently ejected from their packaging when a jar of honey mustard commits suicide, regrouping with Sammy (Edward Norton), a bagel, and Vash (David Krumholtz), a lavash, eager to figure out what truly awaits them on the other side of the supermarket doors. Also on the run is Barry (Michael Cera), a deformed sausage, who comes into contact with the destructive, consuming “gods” and wants revenge.

“Sausage Party” is quite literal at times, introducing the world of Shopwell’s with a musical number lampooning Walt Disney Animation-style extravaganzas (even recruiting studio legend Alan Menken to co-write the track), winding through the aisles as the grocery items break out into song.

The actual tune isn’t quite the cheery celebration of life it seems to be, quickly revealing the anthropomorphic food to be stuck in cycles of judgment and hate, making clear distinctions between sections to avoid mixing religions and races. It’s the first of many beguiling absurdities found in the movie, and the most produced sequence, capturing the bustling atmosphere of the store and its colorful inhabitants, with the residents all ready to enter their version of the afterlife.