Home > Adventure > Pokemon the Movie: Volcanion and the Mechanical Marvel (2016)

Pokemon the Movie: Volcanion and the Mechanical Marvel (2016) 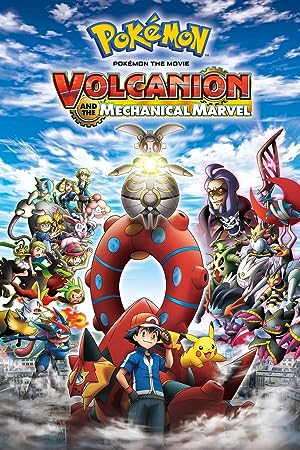 On his way to becoming a Pokémon Master, Ash Ketchum and his companions continue on with their journey. But suddenly, a large mass enveloped in white smoke descends from the sky and lands in front of the group. Surrounding the area with white smoke, is a powerful Mythical Pokémon called Volcanion. Coming from the remote Nebel Plateau, Volcanion lives with Pokémon harmed by humans, and thus holds great distaste towards them. Ignoring the concerns of Ash and his friends, Volcanion immediately tries to leave, but a mysterious force binds Volcanion and Ash to each other. Finding themselves unable to separate, Ash is dragged along as Volcanion continues on its mission.

In a city where large cogs and gears run continuously, a corrupt councillor of the Azoth Kingdom has obtained the ultimate invention: the Artificial Pokémon Magearna. Magearna was created 500 years ago and since lost, until the councillor found and kidnapped it from the Nebel Plateau. The councillor plans to use Magearna’s mysterious power of its “Soul Heart” to take control of the mechanical kingdom. Now forced to work with each other, Ash and Volcanion must save Magearna from the corrupt councillor before he takes control of the Azoth Kingdom.

We join Ash, Serena, Clemont and Bonnie in the Azoth Kingdom, Which its main City comprises mostly of Inventions such as moving sidewalks to auto lifts, with giant gears all over the city to operate the equipment of the City. It’s here where Ash and Co Works alongside Volcanion to protect the Mythical Magearna who was kidnapped by the villain Jarvis to take and use Magearna’s Soul Heart, the invention gifting Magearna its life, to attempt destroy the 9Azoth Kingdom.

Jarvis is a pretty awesome yet typical Villain who is not afraid to hurt, Kill and destroy to get what he wants. and He tries doing this many times throughout the movie.

We also are introduced to the Prince and Princess of the Kingdom, Racel and Kimia.

Racel, the prince, is a very young, hyperactive, innocent boy who had become corrupted by Jarvis and used by him to get Magearna.

Kimia, the Princess, is a quite Serious character hoping to save her brother from Jarvis while Helping Ash and co save magearna.

As the movie Progresses we learn that Volcanion has a very strong opinion on Humanity, despising them for their cruel ways, But unlucky for him he became stuck with our hero Ash ketchum by a device what does not let either of them get too far away from each other, and if they get too far apart, Ash gets quickly dragged through the air hitting volcanion very hard on impact, which makes this movie so arceus-damn funny.

Magearna Is quite a unique pokemon character who is able to produce flowers from her hands. We get the impression she is like a girl because of her stubbornness when she argues with Volcanion and then just walks away very sassily, which is amazing, and also getting embarrassed when Clemont said she was quite heavy to lift. but she is a very loving character who cares for others deeply We also learn that Volcanion and Magearna have known eachother for 500 years and care for eachother very much.

We also Learn about the new power of “Mega Wave” which allows the user to mega evolve their pokemon without the use of a strong bond. but it puts the pokemon into an immense pain. there are a number of key stones used and they are all powered by the stone of Jarvis’ staff.

Jarvis Manages to Take Magearna’s Soul Heart, leaving her body lifeless. He puts it into a machine to amplify and control magearna’s power and turn it into a weapon of destruction, while causing magearna great agony.

As Ash, Volcanion and Kimia attempt to rescue Magearna’s Soul heart, Jarvis uses a capturing invention to capture and torture them while destroying the Azoth Kingdom, but thanks to volcanion they break free from the invention and Ash Breaks Jarvis’ staff, Causing all the Mega evolved pokemon to transform back to their normal forms.

They save magearna from Jarvis but when the Soul heart is placed back into Magearna’s body, She is shown to have no memories. When she hears Volcanion she remembers everything and runs to him, giving him a hug. Suddenly he falls to the ground, presumably dead. Magearna manages to awaken him again.

Link To Download Pokemon the Movie: Volcanion and the Mechanical Marvel

Stream Pokemon the Movie: Volcanion and the Mechanical Marvel (2016)

Stream Pokemon the Movie: Volcanion and the Mechanical Marvel (2016)