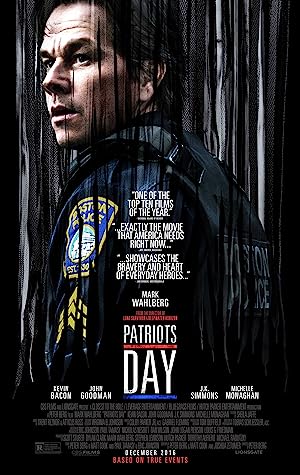 Troubled cop Tommy Saunders (Mark Wahlberg) is assigned security duty for the Boston Marathon, tasked with protecting the finish line as crowds gather for the popular event. Dealing with a bad knee and a drinking problem, Tommy’s slack focus is sharpened after two bombs are detonated during the race, causing chaos and taking lives as citizens scatter for safety. Quickly arriving on the scene are Boston Police Commissioner Ed Davis (John Goodman) and FBI Agent Richard DesLauriers (Kevin Bacon), who set up a command center dedicated to figuring out who created the bombs, poring through surveillance video and physical evidence. As time passes, pressure builds for terrorist Tamerlan Tsarnaev (Themo Melikidze) and his submissive younger brother, Dzhokhar (Alex Wolff), who watch as their identity is gradually revealed by law enforcement officials, setting them on a self-destructive course as Tommy and his fellow cops comb Boston for leads and clues, tracking the siblings’ path of violence.

“Deepwater Horizon” was released only a few months ago, with director Peter Berg and star Mark Wahlberg teaming up to dramatize a real-world horror, emphasizing blue-collar heroism and sacrifice in the face of unimaginable danger. Quickly returning to screens, Berg and Wahlberg pick another harrowing topic for “Patriots Day,” which deconstructs the investigation following the 2013 Boston Marathon bombing. While “Deepwater Horizon” was surprisingly focused work from a scattergun filmmaker like Berg, “Patriots Day” is a giant offering of maturation from the helmer, using what he learned from the previous picture to inform his latest work. Vividly crafted, suspenseful, and respectful to those involved in violence and law enforcement, the feature is easily Berg’s best work, showing unusual passion and control with a thorny tale of investigation and pursuit.

Certainly no one desires to relive the nightmare of the Boston Marathon bombing. The wounds are still fresh, the pain still real. But Berg isn’t in an exploitative mood with “Patriots Day,” showing caution with replication, electing to understand the routine of the day, celebrating how the Marathon unites the city, with runners eager to compete and police taking their positions around the path. Thankfully, the screenplay (by Berg, Matt Cook, and Joshua Zetumer) doesn’t take a docudrama approach to the incident, electing to build a character out of Tommy, who’s initially greeted during a problematic arrest where he destroys his already busted knee while trying to kick down a door. However, his limp doesn’t slow his dedication to the job, with Berg following the cop as he returns home to wife Carol (Michelle Monaghan), guzzles beer, and faces the indignity of his patrol uniform — forced to wear the “clown suit” during Marathon management.

Tommy is an interesting, leathery character, and Wahlberg delivers one of his finest performances as the determined cop who maintains an exhausting adrenaline rush once the bombs are detonated. The ghoulish, obscene act is handled with suspense, but there’s no countdown to the explosions. Instead, the picture explores the victims and their daily lives, with “Patriots Day” identifying those directly hit by the blasts, along with those eventually attacked by the Tsarnaevs, including MIT security officer Sean Collier (Jake Picking) and Dun Meg (Jimmy O. Yang). Mixing actual security footage with recreation, “Patriots Day” paints a vivid portrait of the day’s insanity, with confusion dominating the scene, along with tragic casualties and loss of limbs. And yet, Berg doesn’t emphasize the gore. He uses the display of pure evil to inspire a procedural thriller, studying how the Marathon was halted and assessed, eventually launching a manhunt for the siblings, who believed they could blend back into their everyday lives after the blasts.

Berg keeps “Patriots Day” sharp as the professionals attempt to wrap their heads around such a heinous act. The FBI builds a crude recreation of city blocks inside a warehouse, intensely studying security footage, trying to find suspects while the clock ticks away, facing pressure from the press to identify the act as terrorism. Performances are tight, watching Bacon, Goodman, and J.K. Simmons (who portrays Sergeant Jeffrey Pugliese, the man who confronts Tamerlan during his last stand on Watertown, MA streets) embrace Boston attitudes, with such caustic, cynical, F-word-laden bluster adding touches of tasteful humor to the feature. The hunt begins immediately, and two hours of screentime just fly by, following the professionals around Boston as they try to find anything that could pinpoint the location of the brothers, eventually releasing pictures of the pair to encourage community help. The other side of the situation is also examined, spotlighting the efforts of Dzhokhar’s pothead college roommates to protect their friend after he’s identified as a terrorist, and there’s the strange relationship of the Tsarnaevs, inspecting their soft minds and dedication to malevolence, with Tamerlan searching for masculinity and Dzhokhar getting his kicks through murder. Motivation is suggested, but wisely left undefined.

“Patriots Day” is masterfully edited by Gabriel Fleming and Colby Parker Jr., scored with electro gusto by Trent Reznor and Atticus Ross, and cinematography by Tobias A. Schliessler indulges chaos but isn’t defined by it. And there’s Berg, who preserves a massive amount of respect for police and first responders, celebrating their efforts but keeping them real human beings with sensitivities, exposed to unshakable horrors but still sustaining focus on the end game of capture. “Patriots Day” is a powerful movie, inspiring and emotionally authentic. It’s also a true nail-biter, grasping the enormity of the manhunt which, at one point, completely shut down Boston. Berg has always been fond of careless filmmaking, enjoying screen messiness and ego. But here, he’s finally aware of humility and fragility, taking special care of the Boston Marathon bombing and its feverish, profoundly heartbreaking aftermath.