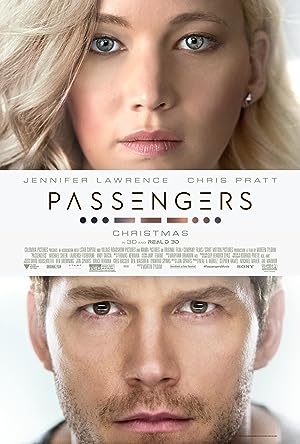 The spaceship, Starship Avalon, in its 120-year voyage to a distant colony planet known as the “Homestead Colony” and transporting 5,258 people has a malfunction in one of its sleep chambers. As a result one hibernation pod opens prematurely and the one person that awakes, Jim Preston (Chris Pratt) is stranded on the spaceship, still 90 years from his destination.

The Avalon is a massive ship speeding through space, enduring a 120 year journey to a colonized planet owned by a massive corporation. Onboard are 5000 passengers and over 200 crew members, all in hypersleep for the lengthy odyssey, ready to enjoy the luxury accommodation once the ship is months away from its final destination. 30 years into the crossing, mechanic Jim (Chris Pratt) is awakened by a malfunction, gradually realizing he’s the only one conscious on the Avalon, left to deal with 90 years of solitude. Unable to fix the situation, Jim utilizes most of what the ship has to offer, including spending time with android bartender Arthur (a scene-stealing Michael Sheen). Driven to depression by his loneliness, Jim decides to wake up writer Aurora (Jennifer Lawrence) to join him, hoping the stranger will fall in love with him, with nothing but time to share as they make a life together.
“Passengers” is a profoundly creepy film, and I don’t think it’s meant to be. The screenplay by Jon Spaihts (“Prometheus”) starts off strong, setting up the strange voyage of the Avalon, which is an enormous ship carrying those rich enough to afford a ride to a new world, and one constructed and controlled by an all-powerful corporation that’s tricked out the vessel with luxury accommodations, sophisticated leisure activities, and the latest in robot assistance, wooing passengers with dreams of a fresh start in the finest spaceship imaginable. Trouble arrives with gradual system failures, including one that pulls Jim out of hypersleep 90 years too early, leaving him to the only human around, grasping the idea that death will come long before he arrives at the colonized planet.
He’s stuck, but exploratory scenes are appealing, offering a rich sense of discovery as Jim gets used to his surroundings, figuring out limitations and hackable regions of the Avalon, with initial nervousness turning into draining routine, putting the character in a troubling situation of solitude, which he cannot handle after a full year of isolation, finding conversations with Arthur no longer able to cure his understandable despondence.
Jim desires a partner during his glacial ride to death, picking Aurora out of the passengers due to her introspective vocation and good looks. His decision to yank her out of hypersleep isn’t made lightly, but it’s made, soon selfishly tinkering with her chamber to simulate an equipment malfunction. She emerges confused, eventually warming up to Jim after going through the five stages of grief, and “Passengers,” incredibly, launches a romance between the pair, which is founded on a grand lie and homicidal interests, though Spaihts chooses to be optimistic about the pair and their developing relationship.
Their meet cute is an intentional death sentence, and “Passengers” rarely acknowledges the vileness of Jim’s act. Instead, there’s a dating arc where the pair experiences the finest things the Avalon offers: dining out, drinking with Arthur, dance competition video games, movies, exercise (Aurora swims daily in an elaborate pool), and tethered space walks. Pratt and Lawrence share amazing chemistry, and they make the best of a bad situation, humanizing the characters to a certain degree, making sparks to illuminate the cavernous darkness Tyldum creates.