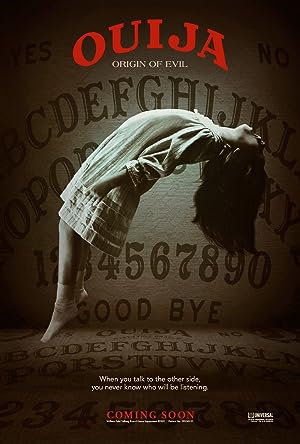 The year is 1967, and widow Alice (Elizabeth Reaser) tries to make ends meet as a psychic, using daughters Paulina (Annalise Basso) and Doris (Lulu Wilson) as séance assistants, striving to bring hope to those trying to contact lost loved ones. Alice uses tricks to put on a show, but she believes in the other side, looking to find her late husband along the way. Picking up on a trend, Alice decides to incorporate an Ouija board into her work, accidentally awakening an evil presence in the house.

Young Doris immediately succumbs to the spirit, named Marcus, tasked with secretly possessing others as Alice and Paulina begin to understand what they’re up against. Brought in to help analyze the situation is Father Tom (Henry Thomas), who works at Doris’s school, joining the family as they put together clues and make ghastly discoveries that pinpoint the child’s supernatural puppetmaster.

While the feature is set in the 1960s, the filmmaking tone here is pure ‘80s. Flanagan doesn’t make a big show of it, but he gives “Origin of Evil” a period spin, opening the movie with an older Universal Pictures logo, and there are visible reel changes throughout, setting a throwback mood for an endeavor that would’ve been right at home with an October 1981 release. Flanagan doesn’t amplify “Origin of Evil” to “Grindhouse” levels of aging, but the little here is welcome, providing a retro viewing experience for those who appreciate that sort of multiplex mischief.

Mercifully, there’s a quality movie to go with all the playful ornamentation. “Origin of Evil” is a prequel, dealing with the younger days of future terror Doris, exploring her family life with mother Alice, who makes a living committing fraud, but does so with pure intent, trying to provide closure to those desperate for answers. She’s in need of her own make-believe medicine, mourning the loss of her husband with her daughters, trusting in the ways of the Other Side despite her manufacturing of spiritual communication. It’s Debbie who first encounters the Ouija board at a late night party, immediately skeptical of its authenticity, but wary of its potential power. Alice sees the board game as a new way to unnerve customers, rigging the planchette with magnets to inspire spooky movement. However, it’s Doris who trusts the dark magic in full, absorbing a visit from Marcus, who’s eager to possess the house and all those who try to intervene.

Flanagan works inventively with the PG-13 rating, trying to rattle viewers with spooky visuals, not crude violence, using Debbie’s voyage to ruin as a starting point for creepy events, turning a child of innocence into an unlikely monster. Debbie’s face stretches unnaturally, she walks around walls, and she uses stealth to sneak up on her victims. “Origin of Evil” isn’t a film that’s going to inspire week-long nightmares, but it supplies a few jolts and macabre encounters, and Flanagan remains tasteful throughout, more interested in conjuring an old-fashioned tale of possession than pursuing relentless mediocrity.

Boo scares remain, but they’re enjoyably crafted, blended appropriately with compelling characterization, watching Debbie encounter first love with Mikey (Parker Mack) while struggling to decode Doris’s possession, which arrives with pint-sized acts of intimidation, a harmonious relationship with the Ouija board, and the ability to inspire nightmares involving the sealing of her older sister’s mouth. Father Tom adds to the experience as the voice of reason, but also one of curiosity, willing to test Doris to save her.