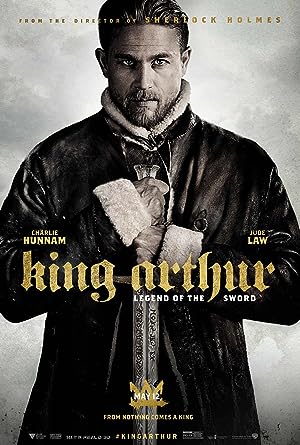 King Arthur: Legend of the Sword (2017)
126 min|Action, Adventure, Drama|12 May 2017
6.7Rating: 6.7 / 10 from 219,853 usersMetascore: 41
Robbed of his birthright, Arthur comes up the hard way in the back alleys of the city. But once he pulls the sword from the stone, he is forced to acknowledge his true legacy - whether he likes it or not.
Director: Guy Ritchie
Creator: Joby Harold, Guy Ritchie, Lionel Wigram
Actors: Charlie Hunnam, Astrid Bergès-Frisbey, Jude Law

Tensions between the worlds of magic and men are explosive, with King Uther (Eric Bana) defending his kingdom of Camelot from evil with help from his sword, Excalibur. Betrayed and murdered by his brother, Vortigern (Jude Law), Uther manages to help his son, Arthur (Charlie Hunnam), escape, sent into a life of poverty, service, and survival, growing up into a defiant and strong young man.

When waters retreat around Camelot, Excalibur is exposed at the bottom of the sea, secured into stone, waiting for the next true king to claim the crown. Planning to kill the victor as he tests community strength, Vortigern is overpowered when Arthur finds himself in command of the magical sword, soon off with a motley crew of soldiers, including Bedivere (Djimon Hounsou) and The Mage (Astrid Berges-Frisbey), trying to organize and return to Camelot as king, seeking revenge on the powermad ruler.