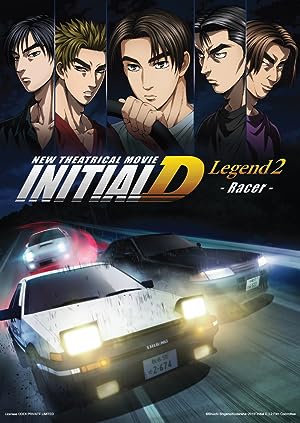 Takumi has brought honor back to his local race team by defeating Keisuke, the co-leader of The Akagi Red Suns, the top street racing team in the Gunma prefecture. Takumi feels that his days of racing are over for he doesn’t think anything special of it since he’s been driving since he was 13. However, Nakazato, the leader of the Myogi Night Kids brings Takumi back to the mountains wanting the number one spot.

Granted the original first installment of the TV series may not have an appealing art style, this movie truly polishes the character designs and uses a very bright resolution to compliment the age of 1080p and 4K screens for Blu-ray releases. It is the same quality of that between the 4th and Final Stage installments of the original series continuity. The rendering of the cars excellently go hand in hand with the quality of the characters and background are animated as well. While the CG of the original TV series was a definite novelty back in 1998, it felt like a high school project for MAYA.

The story is appropriately paced and knows how to use the material. Everything is straight to the point and a majority of the characters are useful and contributing. As for the length of the races, granted it is not 2-4 episodes this time, if any viewers have played the arcade games and know how long it takes for the average player to beat Akina, the length of the races in this movie appropriately reflects that quality from the games. However, Natsuki’s (Takumi’s love interest) sub plot with her enjo kosai relationship with a Mercedes driver from the original series and manga, is once again not featured in this installment.

A big issue for long time fans is the change of seiyuus and most emphatically, no Eurobeat tracks. To hardcore fans such as myself, getting rid of the Eurobeat is like getting rid of the Jazz in a Cowboy Bebop remake/reboot. It was a quality that contributed to the identity of the original series and it just feels empty without it. The new soundtrack may be appealing to viewers who never saw the original series so they can enjoy it with a more open-mind. The new rock soundtrack does have a free spirit feel, but it comes across as too calm and it doesn’t have “the pump” that Eurobeat offers, which goes with the speed and heavy engine sounds. Plus, some verses abuse auto tune, a quality that is wrong with music altogether. It is also sad that MOVE, the group that always did the opening themes to all the original installments have broken up, and to a majority of its established fan base feel it’s incomplete without their energetic tracks.

Furthermore, changing the seiyuu cast is absolutely pointless when all the original cast members are still living and active (unless Shigeno, the manga author pulled a Kurumada when he asked that the seiyuu cast for Saint Seiya should change). The performances of the voice cast feels as one dimensional as the character designs of Gundam SEED. Nearly everybody sounds the same to me except Bunta.

Miki Shin’ichiro was a wonderful Takumi who knew not to elicit any emotions or reactions. Miyano Mamoru as Takumi, come across as too reactionary and does not have that “control” of his emotions, like Miki Shin’ichiro had. Koyasu Takehito as Ryosuke, always gave captivating performances, and the way he articulates the driving techniques and engineering as if you believe he were real. Ono Daisuke (as much as I love him as Jotaro in Jojo’s Bizarre Adventure) just comes across as too hard and aggressive. Hiyama Nobuyuki was already a superb Nakazato, who’s always shown a certain kind of stubbornness, but mixed with stability. Bunta altogether, without the performance of Ishizuka Unshou from the TV series, just feels wrong for every reason I can think that could be another review altogether. But for new viewers, this is probably not going to be an issue along with the change of music.