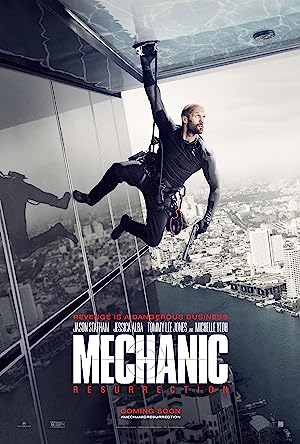 Producers rarely need a reason to mount sequels, but it would be nice to know why 2011’s “The Mechanic” was selected to become a franchise. The picture wasn’t particularly well-received with audiences and critics, and its box office take was flat, failing to achieve the same results as star Jason Statham’s previous action series, “The Transporter.” This mystery may never be solved, but something triggered the creation of “Mechanic: Resurrection,” a follow-up that strips away all the faux grit of the original feature to transform into a James Bond-esque romp that’s as loosely scripted as can be. Paycheck performances and cartoon heroics tend to dominate in “Mechanic: Resurrection,” making it a less satisfying effort than its passable predecessor, with outrageousness missing genuine thrills.

Leaving the life of a contract killer behind, Arthur (Jason Statham) is lured into a bad situation by friend Mae (Michelle Yeoh), who senses trouble when Gina (Jessica Alba) arrives at a Thai island with visible bruises. Believing he’s breaking up a domestic situation, Arthur instead learns he’s been targeted by rival Crain (Sam Hazeldine), who kidnaps Gina, demanding her defender complete three elaborate assassinations, picking off unique targets in hard to reach areas of the world. With Gina’s life on the line, Arthur goes back into business, using his skills of reconnaissance and weapons manufacturing to pull off impossible murders, hoping to retrieve a woman he’s developed feelings for and kill her captor, with the pair’s history weighing heavily on the assassin, inspiring him to treat the situation carefully.

While the original movie was a vague remake of 1972 Charles Bronson feature, “Mechanic: Resurrection” steps away from the ongoing narrative, looking to “The Transporter” series for inspiration the second time around. Arthur’s deadly ways aren’t as devious for the sequel, with director Dennis Gansel (“Before the Fall,” “We Are the Night”) exaggerating acts of evasion and aggression, opening the picture in Rio, where Arthur doesn’t simply slap around baddies, he eludes capture by crawling on top of moving gondolas, making a final life-saving leap onto a passing hang glider, where he flies away. Suddenly, Arthur is a Marvel character, but this graduation to the ridiculous doesn’t energize the viewing experience, with Statham looking almost surprised to be playing this character again. “The Mechanic” didn’t offer an opening for a lengthy screen inspection, leaving “Mechanic: Resurrection” scrambling to come up with something for Arthur to do once back in the business of murder.