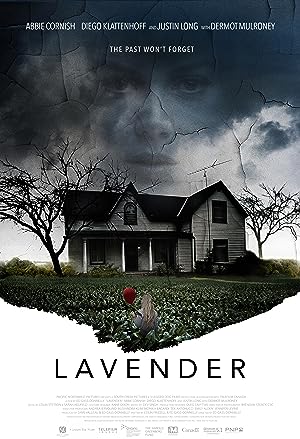 When a photographer (Abbie Cornish) in a failing marriage suffers severe memory loss after a traumatic accident, strange clues among her photos suggest she may be responsible for the deaths of family members she never knew she had. Long plays a concerned psychiatrist who tries to help her recover lost memories.

“Lavender”’s calm, creeping visuals are enhanced by Colin Stetson and Sarah Neufeld’s bold, discordant, malevolent score, all jangling orchestral strings and scuzzy, rumbling bass tones. In total, the film’s style is sharp, and does much to prop up a rather hackneyed portrait of deep, dark secrets coming back to traumatizing life. That process begins once Jane (Cornish) — a photographer who snaps old, abandoned homes because they feel to her like “epitaphs” of their former residents — stumbles upon a rickety abode, and can’t seem to shake its inexplicable pull. When she wrecks her vehicle in order to avoid hitting an enigmatic girl in the middle of the street, and awakens with amnesia partly attributable to a prior youthful brain injury, her recollection process begins, leading her to discover that her pre-foster care upbringing was cut short by some sort of notorious tragedy.

Jane’s “fuzzy” mental state puts a further strain on her marriage to grouchy Alan (Diego Klattenhoff) and her relationship with daughter Alice (Lola Flanery), and is treated by psychologist Liam (Justin Long), who counsels that her condition might “really stimulate some repressed memories.” That it does, and in initially beguiling form, as Jane is soon receiving wrapped packages full of mystifying items (keys, razors, ballerina figurines), as well as spying a young girl who delivers hushed warnings before running away. A

fter Jane learns that she actually owns the house from her photograph — and that her uncle Patrick (Dermot Mulroney) has been caring for it for the past 25 years — she follows Liam’s advice and takes a visit to the old homestead, along the way making a pit stop at a local fair where she gets lost in the type of disorienting, claustrophobic maze (here made of hay) that’s been a horror staple since Stanley Kubrick’s “The Shining.”

Predictable paranormal activity commences upon her arrival at the cornfield-enclosed house: locked doors, creepy music boxes and murmured kids songs — in this case, English folk ditty “Lavender’s Blue,” which is accompanied by Jane’s habit of intoning, “Five, four, three, two, olly olly oxen free,” under her breath. The effect is to cast the film as a rather by-the-books tale about righting bygone wrongs in order to set the purgatorial dead free. Still, amidst a preponderance of devices that are creakier than Jane’s childhood residence, at least Gass-Donnelly and co-writer Colin Frizzell manage to provide a couple of competent twists during their prolonged third act.