Disney has returned to Rudyard Kipling’s “The Jungle Book” a few times. Of course, there’s the 1967 animated classic, which contorted Kipling to create a swinging musical, leading with the hit tune, “The Bare Necessities.” There was a 2002 sequel, and in 1994, the company attempted a live-action version starring Jason Scott Lee as Mowgli, which failed to perform at the box office despite positive reviews. Kipling’s 1894 collection of stories has actually inspired many film and television productions, but none have been as a massive as Disney’s return to the wild with the CGI/live-action take on “The Jungle Book.” Director Jon Favreau utilizes technology, not nature, to inspire this reworking of the ’67 picture, delivering realistic animal interactions and digital environments, laboring to manufacture a world for Mowgli’s mischief instead of finding one on Earth.

Discovered by panther Bagheera (Ben Kingsley) as a baby, Mowgli (Neel Sethi) has been raised by a wolf pack led by Akela (Giancarlo Esposito), mothered by Raksha (Lupita Nyong’o). Living the life of a wild child, with the jungle as his playground, Mowgli has trouble concentrating on law of the land, receiving a shock to the system when tiger Shere Khan (Idris Elba) emerges with a plan to kill the man-cub, knowing that his maturation will bring death to all. Realizing Mowgli is better off in the man village, Bagheera escorts Mowgli through the jungle, only to lose track of the boy, who encounters the hypnotic seduction of python Kaa (Scarlett Johansson), the threat of gigantopithecus King Louie (Christopher Walken), and the companionship of bear Baloo (Bill Murray), who learns to appreciate the kid as more than just a way to get honey out of hard-to-reach areas.

As massive as “The Jungle Book” looks, most of it is created with computers. Avoiding a rough location shoot, Favreau sticks to digital environments to create the wilds of India, building a vast animal kingdom for Mowgli, who swings from trees, climbs rock formations, and travels across grasslands. It’s an impressive technical achievement, managing to fool the eye for the most part. The real triumph of the picture is creature creation, with animators delivering strikingly realistic animals for Sethi to interact with, finding interesting ways to reimage known characters, merging their natural appearance with anthropomorphized touches. Admittedly, this causes a few problems, including the more cartoonish extremes of the effort, with Baloo emerging as a ferocious looking bear who also happens to crack wise and sing “The Bear Necessities” with Mowgli, generating a weird discomfort with the most lovable addition to the animal line-up. 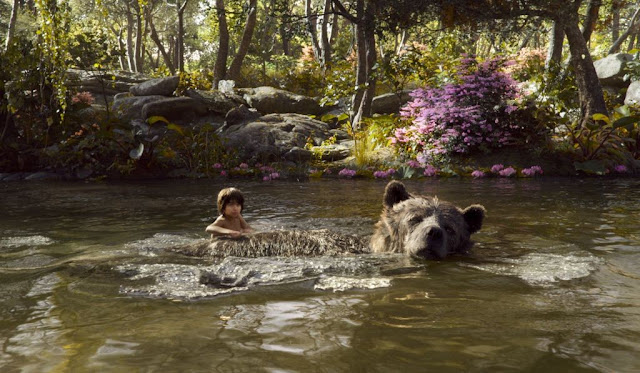