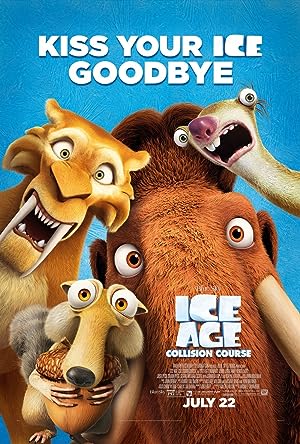 It may seem hard to believe, but “Ice Age: Collision Course” is actually the fifth entry in the franchise, and nobody seems more surprised by the overwhelming success of the series than its producers.

Scrambling to come up with plots to keep the cinematic cash machine open, the production finally reaches a limit to Paleolithic shenanigans with “Ice Age: Collision Course,” which doesn’t really bother with a story, charging full speed ahead with cartoon gags instead, perhaps realizing there’s nowhere left to go with the initial “Ice Age” premise.

Essentially committing to film anything that pops into their minds, co-directors Mike Thurmeier and Galen T. Chu go for broke with “Collision Course,” hoping to charm with silliness instead of endear with established personalities heading in a fresh narrative direction.

Eternally protecting his beloved acorn, Scrat (Chris Wedge) stumbles into an alien ship that sends him into deep space, causing all kinds of trouble, including the creation of a massive asteroid speeding toward Earth. Down below, Manny (Ray Romano) is dealing with the maturation of his daughter, Peaches (Keke Palmer), who’s fallen in love with Julian (Adam Devine), trying to work up the nerve to tell her parents that she’s ready to roam on her own.

Taking frustrations to his wife, Ellie (Queen Latifah), Manny’s concerns are soon replaced with panic as the asteroid is spotted, sending Manny, along with pals Diego (Denis Leary) and Sid (John Leguizamo), on the hunt for shelter. Picking up Buck (Simon Pegg) along the way, The Herd tries to craft a plan to save themselves, but their efforts are thwarted by a pack of Dromaeosaurs, led by Gavin (Nick Offerman), who are after Buck for their own reasons.