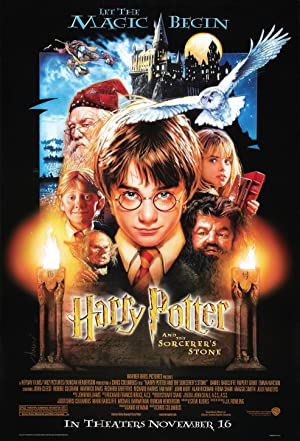 Harry Potter and the Sorcerer's Stone (2001)
152 min|Adventure, Family, Fantasy|16 Nov 2001
7.6Rating: 7.6 / 10 from 782,085 usersMetascore: 65
An orphaned boy enrolls in a school of wizardry, where he learns the truth about himself, his family and the terrible evil that haunts the magical world.
Director: Chris Columbus
Creator: J.K. Rowling, Steve Kloves
Actors: Daniel Radcliffe, Rupert Grint, Richard Harris

This is the tale of Harry Potter (Daniel Radcliffe), an ordinary eleven-year-old boy serving as a sort of slave for his aunt and uncle who learns that he is actually a wizard and has been invited to attend the Hogwarts School for Witchcraft and Wizardry. Harry is snatched away from his mundane existence by Rubeus Hagrid (Robbie Coltrane), the groundskeeper for Hogwarts, and quickly thrown into a world completely foreign to both him and the viewer. Famous for an incident that happened at his birth, Harry makes friends easily at his new school. He soon finds, however, that the wizarding world is far more dangerous for him than he would have imagined, and he quickly learns that not all wizards are ones to be trusted.


Critics talk about how incredibly faithful the movie is to the book, and perhaps I’d have had an easier time detaching the two in my mind had the movie set off on its own course. Indeed, many classic children’s movies, like “The Wizard of Oz” and “Mary Poppins,” are so successful partly because they’re so different from the books that inspired them. But these are exceptions; in my experience, most children’s movies reveal their weaknesses in how they diverge from the books upon which they’re based. And much of what makes the Harry Potter phenomenon unique is that it is the first time in ages that a children’s book, without a movie accompanying it, has generated this much popularity. According to an article I read a year ago, the universe of Harry Potter has become as real in the minds of youngsters and adults as that of a popular movie series like Star Wars. Therefore, it will be very hard for any film based upon it to compete with it. In the minds of die-hard fans, any changes made to the story will be seen as desecrating the fantasy world that Rowling created. That’s why it’s easy to understand why the filmmakers were so reluctant to change anything.

As a faithful rendering of the book squeezed into a two-and-a-half hour period, the movie is beautifully done. I don’t have a single complaint about any of the actors, who successfully bring to life, with the aid of costume design and special effects, the many colorful characters from the book. My favorite character, the giant Hagrid, is played by Robbie Coltrane, and I say with no exaggeration that he is exactly how I imagined him while reading the book. It’s as if they took the image in my mind and transferred it to the screen. While I had my own personal image of Snape (for some reason, I always imagined him as the head villain from another Chris Columbus film, “Adventures in Babysitting”), Alan Rickman is perfect in the role. I usually expect to have words of criticism for some performances, but I just don’t. The remaining adult actors, including Maggie Smith as Professor McGonagall and Richard Harris as Albus Dumbledore, are as good as they possibly could be, and the kids do an excellent job of holding their own against these veterans. Some have criticized Daniel Radcliffe for appearing too subdued in the title role, but that’s exactly how the character is portrayed in the book: modest, unassuming, and laid-back. The kids who play Harry’s two best friends are flawless.

I had a lot of worries about the fact that it was being directed by Chris Columbus, whose entire directorial career so far has consisted of over-the-top slapstick films. I was pleasantly surprised that he did not direct the Harry Potter film in this way. Except for brief moments like the children’s delayed reaction to a giant three-headed dog they encounter and Harry’s swallowing the quaffle ball, there is nothing here to remind us that this film is directed by the same person who gave us films like “Home Alone” and “Mrs. Doubtfire.” Indeed, I think Columbus may have gone just a tad bit too far in trying not to make the film seem cartoony. I would have liked to see a little more emotion on the actors’ faces at certain times. Overall, however, his restraint works nicely in giving the film the kind of believability the book possesses.

But much is left out. Harry’s caretaker Uncle Vernon, a prominent character in the book, is given less attention in the movie than some of the bit characters. The gently satirical aspects of Hogwarts School aren’t in the movie at all. We never see the ghostly history teacher who died several years back but kept on teaching. Lines like the following–“Professor McGonagall watched [her students] turn a mouse into a snuffbox–points were given for how pretty the snuffbox was, but taken away if it had whiskers”–find no equivalent in the movie. The movie does include platform nine-and-three-quarters, though the way the kids disappear into the wall isn’t as mysterious as I had visualized, and the sorting hat is there, minus the great poem explaining the differences between the four schools.