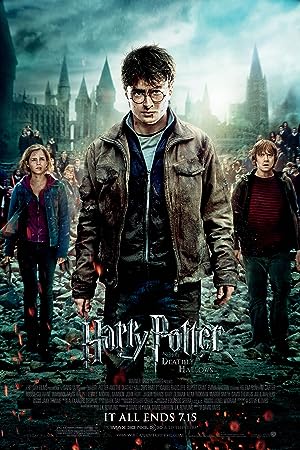 In the epic finale, the battle between the good and evil forces of the wizarding world escalates into an all-out war. The stakes have never been higher and no one is safe. But it is Harry Potter who may be called upon to make the ultimate sacrifice as he draws closer to the climactic showdown with Lord Voldemort. It all ends here.

When last we left our faithful heroes the haunted and hunted young wizards were completely isolated from their teachers and friends for the first time in their lives; on the run and battling for their very existences after burying a dear friend following a too-close-for-comfort encounter with Death Eater Bellatrix Lestrange (Helena Bonham Carter). To its credit, The Deathly Hallows: Part 2 doesn’t waste any time.

It barely pauses for an opening title sequence; the theme that has so dutifully accompanied Harry Potter for eight films now offers little cheer or refuge, and even less relief or respite. Lord Voldemort (Ralph Fiennes), having seized the Elder Wand from Dumbledore’s grave, turns his attention to his favorite pastime: plotting the gory demise of nemesis and beloved Hogwarts messiah, Harry Potter; Hogwarts continues to cede power to Severus Snape (Alan Rickman, stealing yet another Potter film) and Voldemort’s demented Death Eaters; Snape, in turn, reflects on the events that placed Hogwarts in his hands; and Harry, Hermione and Ron set out to find and destroy the remaining Horcruxes and put an end to Voldemort’s reign.

Permanently. What follows is an arresting clash of the titans in which the Potter-led trio break into Gringotts bank, make their way back to Hogwarts, reunite with their secret brothers in arms, and take the fight to Voldemort’s legions. Wands crackle, magic sizzles, dragons screech, giants topple, heroes weep, villains shriek, and gods fall.

There’s a disconnect between all of the VFX wizardry and narrative power, though, slight as it is. Chalk it up to the fact that, separated from Part 1, The Deathly Hallows: Part 2 is essentially a string of climaxes comprising one of the longest third acts Hollywood has ever given us. Or chalk it up to the sheer amount of plot points, characters and set pieces it has to nurture (or, on occasion, neglects to nurture). If Part 1 was a slow-brew masterpiece of isolation, loneliness and adolescent uncertainty (which it absolutely was, no matter how short-sightedly some have dismissed it as a lesser film), Part 2 is a wands-to-the-wall actioner through and through.

Oh, it doles out as many arresting character beats, tragic developments and heart-wrenching realizations as previous Potter entries, but it does so while drawing upon everything from Die Hard to Braveheart to The Matrix Revolutions (of all things). Part 1 may have felt as if it had been cut short, deprived of a proper ending, but Part 2 feels as if it’s been trimmed down and robbed of a proper beginning.

Thankfully, the magic of home video rectifies the disconnect somewhat, even if there are still too many tiny twists and turns that aren’t given enough explanation. Wait, how did the Sword of Gryffindor… but then how does Harry… so what do the Malfoys actually… but can’t Voldemort just… so Hogwarts is… is any of this answered in the books? Don’t search too long and hard; some answers simply aren’t provided in the course of the film and can only be found in Rowling’s text.

Potterphiles who’ve pored over every last page won’t bat an eye at the exclusions, but those weened on the screen adaptations alone will be left wishing Yates and Kloves had added another ten or fifteen minutes of material, expositional or redundant as some of it may have been.

Otherwise, The Deathly Hallows: Part 2 is as fitting and fantastic a franchise finale as anyone could hope for. Harry, Hermione and Ron take several bold, long-awaited steps into adulthood, each in their own way, and Radcliffe, Watson and Grint come full circle, their once-rosy cheeks faded but their talent and performances in full bloom. Nearly every Hogwarts student, teacher, denizen and outcast is given his or her own moment to shine as well.

Old favorites return, recent additions step out of the shadows, friends and foes are stuck down and lifted up, spirits lend support, and rivalries are brought to fruition. No stone is left unturned (least of all the Resurrection Stone), no devious deed is left unpunished (so long as you’re willing to forgive a trio of villains who walk off into the sunset), no sacrifice goes unrewarded, no downfall or revelation disappoints.

(The action itself is a bit pew! pew! pew!, pew! pew! pew!, but there’s only so much that can be done when two armies are pointing sticks at one another.) Elsewhere, the mysteries surrounding Snape’s loyalties and motivations are finally put to rest in one of the most stunning, emotionally charged and gratifying sequences of any Harry Potter film to date. Thematically, it makes Snape the most intriguing character in the Potterverse. Visually, it rivals Part 1’s beautifully animated fairy tale. Ultimately, it might just be the finest sequence of the series; the one that will change the way you watch the films the next time you stage an eight-entry marathon.

With the double and triple crossing and horcruxing that littered previous Potter films all but exhausted, the story is at long last able to hone in on Harry and Voldemort’s contest of wills and wiles. But instead of elevating Harry into a nigh-unstoppable force, it’s Voldemort who undergoes crucial changes. Slowly stripped down to his slithery core, the Dark Lord finds himself on a crash course with mortality, a descent Fiennes plays with a sense of sweaty unease and weary restlessness; qualities we just haven’t seen in Voldemort before now, qualities that make him that much more fascinating.

Harry’s is a journey of actualization, one that isn’t dependent on his own strength but rather on that of his friends and fellow wizards. He’s come an undeniably long way, but he reaches his destination thanks to the same never-say-die spirit that’s driven him through the entire series. He doesn’t rely on a super spell, a doomsday wand, or a surge of supernatural power. Harry is what Harry’s always been: a well-intentioned boy learning how to be a man, a leader, an inspiration and, reluctantly perhaps, a savior. It’s in perfect contrast to Voldemort, really: the unremittent monster dead set on doing everything in his power to abandon his humanity.

Voldemort wants to be feared; Harry just doesn’t want to be afraid anymore. For all the darkness that presses in, for all the evil that promises to overcome the boy wizard, Harry Potter and the Deathly Hallows: Part 2 arguably dares to hope more than any other film in the franchise, even more so than The Sorcerer’s Stone and The Chamber of Secrets. The relief that comes at the end of Voldemort’s mad ascension is tainted by sadness and loss, but Hogwarts finally earns a moment of real rest, Harry finally finds some measure of real peace, and Potter filmfans are finally able to truly justify all the love and tears they’ve invested in the series from the beginning.