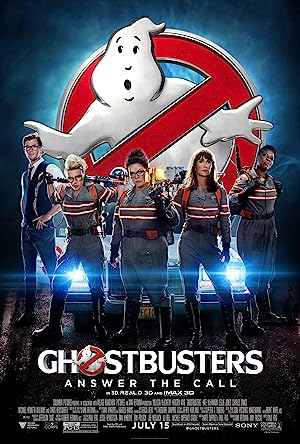 It was inevitable that someone would eventually work up the nerve to remake the 1984 classic, “Ghostbusters.” Unable to get a second sequel up and running, the studio eventually turned their attention to a full reboot, but their choice of director was Paul Feig, a man not necessarily known for his way with visual effect-laden extravaganzas, previously helming “Bridesmaids” and “Spy.” Feig can’t completely pry himself away from his bad habits, but his refreshing of “Ghostbusters” is actually a substantial amount of fun when it actually makes time for the busting of ghosts. Bellylaughs are scarce, but the picture has sporadic energy, while the cast offers a significant amount of charm to help the material squeeze through a few dismal ideas.

Trying to sell herself as a respectable college professor, Erin (Kristin Wiig) is pulled into her previous life as a paranormal investigator when her old partner, Abby (Melissa McCarthy) returns to her life, joined by nuclear engineer Holtzmann (Kate McKinnon). Coming into contact with an actual apparition in New York City, the women decide to open a business dedicated to the eradication of pesky spirits, with Patty (Leslie Jones) becoming part of the team after the MTA worker has a close encounter with the dead. Hiring handsome but dim Kevin (Chris Hemsworth) as their receptionist, the “Ghostbusters” are ready for action, quickly coming face to face with the developing threat of Rowan (Neil Casey), a local weirdo who’s secretly planning a spectral apocalypse. With the newly armed investigators settling into their strange world of belief, the city, led by Mayor Bradley (Andy Garcia), soon needs their services to avoid a particularly slime-slicked doomsday.

Writers Feig and Kate Dippold face an impossible task of redirecting the “Ghostbusters” franchise to a new horizon, and one that does away with any of the working class attitude that defined the 1984 endeavor. The screenplay remains close to the structure of the original work, but Feig retains his sense of humor, keeping the characters riffing when punchlines aren’t working, while the general vibe of the movie is sugared, keeping light with daffy characters while the helmer attempts to launch a few scares with ghost encounters, most taking a moment to coat Erin in spewed and splattered slime, which Feig is a big fan of, keeping the goop sloshing around throughout the effort. Jokes are mostly lame, even introducing a fart gag to the series, but Feig has something more in mind when he’s not spinning his wheels with dismal improvisations (the cast is clearly baffled when forced to work within the confines of the PG-13 rating) and absurdly ineffective running gags about bad Chinese takeout (bless her heart, McCarthy works overtime to make this bit stick). The production is far more interesting when crafting a few frights along the way, delivering impressively gruesome ghosts and passable menace as the burgeoning threat around the city grows in intensity.