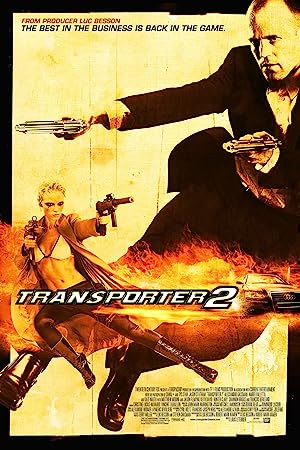 Transporter 2 is proof-positive that even the glitziest, adrenaline-pumping action extravaganzas need at least a hint of a well-developed story to succeed. While this film’s predecessor, The Transporter, didn’t offer viewers even an inkling of an Oscar-worthy screenplay, it did manage to develop its characters enough to care and place them in an environment and with a purpose to hold our cheering interest for ninety minutes. Sadly, this sequel fails in every aspect. To be blunt, Transporter 2 is a bad movie, one that fails to deliver the goods or build upon the strengths of the first film, namely expanding on characters we grew to love and introducing new ones that spark at least a modicum of interest on the part of the audience.

Even the film’s action sequences come off as dull. The villains are one-dimensional and over-the-top silly (could it get any goofier than a gothic prostitute look-alike firing off a pair of Glocks?). The makers of Transporter 2 seem to have foregone any semblance of good storytelling and decent characters. Rather, they simply seem to have cranked-up the action as much as possible, and quite frankly, the action is out of the realm of comic book-turned-live action and into completely ridiculous, and none of the action is helped by shoddy special effects, a few of which reminded me of the notoriously bad plane crash scene in Air Force Once.

Frank Martin (Jason Statham, Crank) is back, this time playing the role of a chauffeur to young Jack Billings, son of Jeff Billings (Matthew Modine, Full Metal Jacket), a U.S. drug czar. Frank’s bond with Jack is strong, and the two have become friends. While taking Jack to a routine doctor’s appointment, Frank notices several continuity errors committed by the staff and doctors themselves, ultimately leading him to believe that something may be amiss. Indeed, he finds two “doctors” attempting to inject young Jack with something, and Frank and Jack escape but not before facing off against the deadly Lola (Kate Nauta, The Game Plan). A turn of events forces Frank to participate in Jack’s kidnapping anyway and he becomes a prime suspect in the case. Frank must not only avoid the authorities, but also fight to retrieve Jack, discover why he is so important to a Colombian drug cartel, and find an anecdote for a virus Jack’s been given, all before the groups ringleader, Gianni (Alessandro Gassman) can see his evil plan realized.

As the movie opened, I was impressed. The continuity with the opening scene from the first Transporter film proved a nice touch for fans, and the subsequent action sequence set the tone for what Frank is capable of. Unfortunately, the movie fell apart from there. While this sequel is infinitely glitzier than the first, it lacks the heart of the original Transporter film. Frank’s character undergoes no new developments in this film, save for his bonding with young Jack.

Even so, it’s really not all that different than his bonding with his human package from the first film. Frank retains his incredible sense of timing, space, and combat artistry, and in the style of Jackie Chan, uses his environment to great effect, neutralizing a room full of enemies by utilizing any object he can lay hands on. Still, the character lacks an arc here and seems to have lost the charm and charisma displayed in the previous entry of the series.

The plot is filler, a means to an end to showcase as much action as can be crammed into 80-some minutes without becoming a highlight reel of stunts, explosions, gunshots, and special effects. Speaking of special effects, they’re horrendously bad in this movie (an exploding helicopter about a third of the way through the movie is laughably terrible).

As I noted in my review of the first film, I felt it succeeded in what it tried to do (namely create a living, breathing cartoon), but unfortunately that just might hold true here as well, but for all the wrong reasons. This sequel tries desperately to outdo the first film (and every other action flick on the market, for that matter) in terms of setting up elaborate and unrealistic stunts, situations, and fight choreography that tends to work if you’re the aforementioned Jackie Chan or John Woo (or The Transporter), but not here.

Sadly, the talent behind the making of the film choosing to place all their eggs in this particular basket proved the wrong move — there simply has to be more than filler to progress a movie from one action extravaganza to the next, and the plot just isn’t tight enough, nor do we become sufficiently attached to the character, to really care who wins or loses, and why.