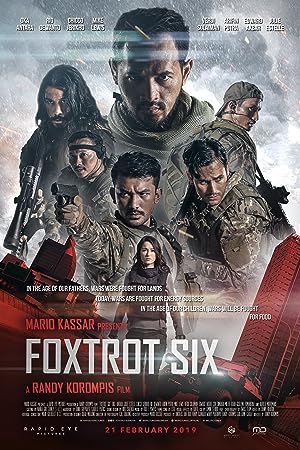 What is good from this movie? CGI and VFX. It was a fun ride to watch made in Indonesia and has good CGI, although not better or as good as Hollywood, but we’re making progress here. Characters. Oka Antara successfully portrayed Angga in his best. No background except his devoted love for Sari (Julie Estelle). Tino is the most bright and has sexy accent among all. Mysterious character like ‘Spec’ (Chicco Jerikho) supposed to be a key player, but with all mystery made it ‘perfect’. What need more elaboration or explanation? Story. Having 80 script over 3 years in the making was not easy role for Korompis, but to make it better, he needs to make a better detailed story or working together with screenplay or scriptwriter.

It feels like ‘Frankenstein’–if you get what I meant. Foxtrot. There is no explanation about the symbol–either a miss or a clue like Marvel Cinematic Universe. Marketing. Having MD as distributor and marketer surely escalating the chance and game, but it needs improvements, but kudos to F6, the sequel/prequel/spin-off will be easier to reach audiences. What I like in this movie? Just Angga’s grand introduction in dystopian setting. Having advanced technology like Stark in each movies. A melodramatic over ‘found the lost one’ and surprising fact. Awesome hunks. Well, who can resist if there is Arifin Putra, Oka Antara, Mike Lewis, Rio Dewanto and Chicco Jerikho in one screen and together pursuit one goal.