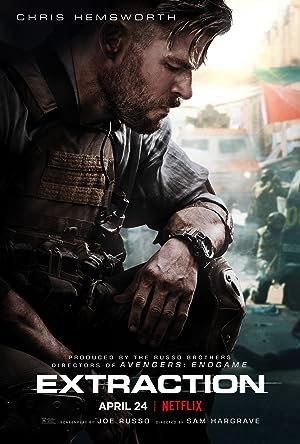 Chris Hemsworth is often cast in physical roles, with producers working very hard to transform him into an action-ready leading man. Recently, he’s done time in “Men in Black: International” and “12 Strong,” while continuing his work in the MCU as Thor in three recent features, but “Extraction” is meant to be his “John Wick.” Directed by Sam Hargrave, a veteran stuntman (in charge of the mayhem found in “Avengers: Endgame” and “Captain America: Civil War”), “Extraction’ makes a very specific attempt to deliver controlled chaos for its audience, going feral with extended chase sequences and moments of highly choreographed brawling. It’s Hargrave’s helming debut, and his instincts with editing leave much to be desired, but the raw power of the movie is impressive, making good use of Hemsworth’s non-Thor appeal, offering the performer a chance to pound bad guys and deal with his character’s potent sense of protection.

The screenplay for “Extraction” (an adaptation of a graphic novel) is credited to Joe Russo, one half of the filmmaking duo responsible for the last two “Avengers” blockbusters. Russo knows scale and he’s familiar with Hemsworth’s limitations as an actor, putting such knowledge to use in the feature, which offers Tyler as a miserable man with a haunted past, turning to booze and pills to keep himself and his battered body even. Ovi is equally unsettled, left with a life of privilege that’s become a prison after his father goes to jail, leaving Saju in charge of a boy who craves freedom, often secretly spending time with his friends in public spaces, which enrages Mahajan. There isn’t any sunshine in “Extraction,” which presents time with depressed people looking to make sense of their existence, including Saju, who’s trying to provide for his family, only to be exposed to violence by his boss, who intends to maintain criminal control while kept inside a cage. A happy time movie this certainly isn’t.

Russo tries to give every character some shading, changing the stakes for several players, including Saju, along the way. And he builds a central relationship between Tyler and Ovi, giving the mercenary an emotional reason to stick with the boy as they experience all kinds of ultraviolence. “Extraction” isn’t weightless, but it’s overlong, in need of a tighter edit that includes the elimination of Gaspar (a full ham David Harbour), a local who offers a safe haven for Tyler and Ovi. It’s a film-stopping scene. There are a few others in the endeavor, but “Extraction” builds to an explosive finale, which blends absolute havoc (including the visual of art-house staple Farahani using a bazooka to take out a helicopter) with “Saving Private Ryan” profundity, which is a bit of a reach, but still connects as intended. Hargrave can’t keep his feature running at top speed, but he has a special vision for the picture’s offerings of ultraviolent bedlam, and that’s what holds the whole thing together.