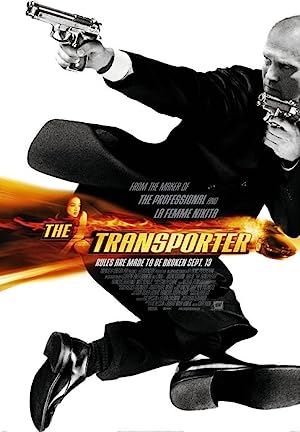 Frank Martin (Statham), is a man whose credentials include ex-special forces operative and reliable transporter of goods. He’s methodical and calculating, his methods precise and infallible, all demonstrated during a high-speed pursuit where Martin drives a getaway car for four criminals (make that three, actually. He didn’t calculate for four, but did he calculate for the blood and brain matter left over from the extra man? Apparently he has a slight margin for error).His next job involves the transportation of a large package, one that he finds moving when he stops to change a flat tire. Sticking by his rules (never open the package), he moves on, but curiosity gets the best of him and during his next stop, opens the bag to find inside it a girl named Lai (Taiwanese actress Shu Qi).

Freeing her of her binds to take a drink and go to the bathroom, she briefly escapes, but a frustrated Martin re-captures and delivers her to a man known as “Wall Street” (Matt Schulze, Mr. Brooks). Martin agrees to another delivery for “Wall Street,” but unbeknownst to Martin, the package contains a bomb meant to kill him. He’s saved only by fate and returns for revenge and finds Lai in his car after he’s done his damage. Lai informs Martin that “Wall Street” is set to smuggle dozens of people into the country via cargo containers, members of her family included. Martin agrees to help, exacting his revenge along the way.

The Transporter is a rather funny movie, one that follows every convention in the book. When Martin first lays eyes on his “cargo,” a truly sappy, 90s-inspired romantic ballad theme rises to the occasion, and I couldn’t help but to laugh at the ridiculousness the music added to the scene. Parts of the movie feel almost like a violent cartoon come to life, and for this material, that strategy works to great effect. So much of what we see is far over-the-top and unrealistic, but the movie was made for the sole purpose of showing off some fantastic stunts, and the lack of realism combined with some lighthearted music (I especially enjoyed the beat over the first confrontation in chapter 11) set just the right tone for the film.

Directors Corey Yuen and Louis Leterrier have nailed the look and feel of a real-life cartoon, creating a movie that isn’t necessarily “good” but a perfect example of ridiculous violence brought to life. It’s not over-the-top like Shoot ‘Em Up, which is the definitive true-life violent cartoon movie, but this one is in the same league, simply toned down a bit for its PG-13 rating. The lack of excessive blood and language isn’t a detriment to the story. Rather, it adds to the feel of the ridiculousness of the plot and action, everything being almost what we would expect to see if The Transporter was indeed a Saturday morning cartoon. What makes it all work, unlike what we see in Transporter 2, is that the plot is concise and simple. We instantly form a bond with the characters, cheer for them, and care about the outcome of the movie rather than waiting in boredom for the next explosion or fistfight.

Jason Statham is excellent in his role. The methodical way he goes about his business, his cool attitude under pressure (even with a gun to his head), and the precision with which he performs his tasks (“Transportation is a precise business,” after all) is a credit to Statham’s ability as an actor to work in projects such as this one. He’ll probably never win an Oscar, but he’s very good in the right role, and this is definitely the right role for him.

Co-written by Luc Besson (director of The Professional and The Fifth Element) and Robert Mark Kamen (The Karate Kid, Gladiator), the film has an instant credibility and aura to it, and for the most part, the end product doesn’t disappoint. These writers have penned a story tailor-made for action audiences and have left no stone unturned in setting the foundation for a film that solidified Jason Statham as an action star.