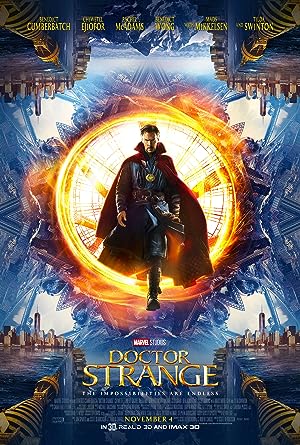 After kicking off “Phase Three” of the Marvel Cinematic Universe with last summer’s superhero battle royal, “Captain America: Civil War,” Marvel Studios returns to experimental mode with “Doctor Strange.” Attempting to establish a comic book character that’s different from the costumed savior norm, the producers try to bring a little magic to multiplexes, messing with time and space to give the titular warrior a unique widescreen space to show off his capabilities. Much like 2015’s “Ant-Man,” “Doctor Strange” isn’t based on a household name, requiring a little invention from the production to make the weird world of Stephen Strange something special. While the feature recycles Marvel origin story formula, it’s a mostly successful and visually dazzling introduction for the wizard, who fits in comfortably with the ongoing brand name world-building, making him a welcomingly oddball avenger.

Stephen Strange (Benedict Cumberbatch) is a hotshot neurosurgeon who performs miracles with his mind and hands, saving lives from certain death. Too self-absorbed to maintain a relationship with fellow surgeon Christine (Rachel McAdams), Stephen remains in his own world of luxury and ego, only to lose everything after a horrific car accident robs him of the use of his hands. Ferocious in his quest for rehabilitation, Stephen hits rock bottom when nothing is able to help, finally turning to rumor when he hears the miraculous tale of a man named Pangborn (Benjamin Bratt), a paraplegic who learned to walk again.

Finding his way to Nepal, Stephen seeks help from the Ancient One (Tilda Swinton), a mentor who resides in the secret compound Kamar-Taj, able to teach her pupil the ways of the Mystic Arts, which he refuses to accept at first. Learning about the astral dimension and the possibilities of manipulating it, Stephen begins to hone his skills, also looked after by Mordo (Chiwetel Ejiofor) and librarian Wong (a scene-stealing Benedict Wong). Growing in power, Stephen is put to the test when Kaecilius (Mads Mikkelsen) arrives on the scene, challenging the Ancient One with stolen forbidden rituals and malevolent followers.

Unlike simplicity found with heroes such as Iron Man and Captain America, there’s substantially more to unpack with Doctor Strange, who isn’t just another guy in a cape trying to save the world. Screenwriters Jon Spaihts, C. Robert Cargill, and Scott Derrickson (who also directs) have a lot of heavy lifting to do with this character, who has a little more to work through than a typical redemption story. We’re introduced to the doctor at his most powerful, casually debating music history as he performs tricky surgical feats, even extracting a bullet from a patient’s brain, proving his muscle with rivals and Christine, who’s frustrated with their tenuous relationship, unable to compete with Stephen’s own ego.

As the best Eastern tales go, Stephen is eventually ruined, bottoming out with bad hands after his accident, left without a future and money as his life goes up in smoke, forcing humility on the man, who searches for a miracle cure. The plot soon arrives in Nepal, but instead of a straightforward dismantling and reconstruction of a hero, “Doctor Strange” goes psychedelic, entering the depths of the Mystic Arts with the Ancient One, who senses potential in Stephen, but needs to break down his defenses of cynicism first.