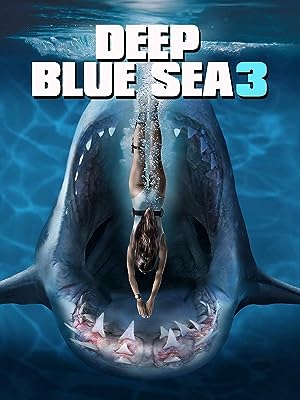 Studying the effects of climate change off the coast of Mozambique, a marine biologist and her team confront three genetically enhanced bull sharks. Now, a new bloodbath is waiting to happen in the name of science. Will humans never learn?

One of Deep Blue Sea 3’s earliest scenes features star Tania Raymonde diving as she records a video blog, preaching about climate change. Rising waters, changing animal behaviors, and other soon-to-come catastrophes become this killer shark movie’s thesis. By the end, two main characters find themselves trapped in a building, sinking, as rising waters threaten to drown them. This is not a subtle message film.

There’s more too – big pharma plays a key role, as it did back in the first film, the researchers seeking to cure Alzheimers and none-too-smartly using bull sharks as their basis. Those sharks want to eat people, because that’s why Deep Blue Sea 3 and its predecessors exist. Oddly, after spending some 90-minutes about how terrible the world and humanity are, the final lines from Raymonde have her wanting to return to civilization – the same civilization plagued by global warming and rouge pharmaceutical executives. Lots to look forward to then.