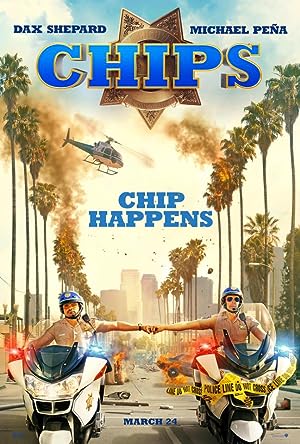 Jon Baker (Shepard) and Frank Ponch Poncherello (Peña) have just joined the California Highway Patrol (CHP) in Los Angeles, but for very different reasons. Baker is a beaten-up former pro motorbiker trying to put his life and marriage back together. Poncherello is a cocky undercover Federal agent investigating a multi-million dollar heist that may be an inside-job inside the CHP. The inexperienced rookie and the hardened pro are teamed together, but clash more than click, so kick-starting a real partnership is easier said than done. But with Baker’s unique bike skills and Ponch’s street savvy it might just work, if they don’t drive each other crazy first. Written by Warner Bros.

Someone, somewhere gave piles of money to writer/director/star Dax Shepard to make a film version of “CHiPs,” a late 1970s television show that’s mostly known today for its ridiculous episode on the Los Angeles punk rock scene and for being the program that featured Chris Pine’s father, Robert. Not just taking a cue, but the entire approach of the Channing Tatum/Jonah Hill “21 Jump Street” adaptation, “CHiPs” aims to be violent, irreverent, and comically casual, working very hard to appear effortlessly crude. What Shepard actually achieves here is an oppressive viewing experience that’s shockingly light on action and stunts and abysmal with funny business, missing the experience of the original show to be just another riff-heavy stinker that mistakes moronic shock value for cleverness.Trying to make a large score of money to help himself and his junkie son, Raymond (Justin Chatwin), California Highway Patrol Officer Vic (Vincent D’Onofrio) has masterminded various armored car heists, disrupting civilian life and thinning out law enforcement ranks. Brought in to investigate is a Miami FBI agent going undercover as Ponch (Michael Pena), a motorcycle cop paired with rookie Jon (Dax Shepard), a former motocross star who’s looking to change his miserable life. While Jon aims to impress his supervisors and deal with his broken marriage to Karen (Kristen Bell), Ponch avoids police duty by pursuing clues, hoping to gather the right evidence and expose Vic’s increasingly hostile actions. Unfortunately for the case, Ponch and Jon have difficulty connecting as partners, forced to understand each other’s troubling personalities, bodily limitations, and sexual urges as they come together as a force of justice, tearing across L.A. with hopes to thwart Vic’s final score.

Why an FBI agent from Miami would be the first choice to clean up the California Highway Patrol is the first of many questions Shepard avoids answering in his screenplay. Requiring only the thinnest of motivations to pair Ponch and Jon, “CHiPs” establishes a general disregard for logic early on, preferring to exist in a B-movie realm where commuters sit patiently while masked gunmen set off plastic explosives on armored trucks in broad daylight and Vic is capable of talking a man into suicide, which is the event that triggers Ponch’s inexplicable cross-country journey. Nothing in “CHiPs” makes much sense, but I suppose it doesn’t have to, as the production is more invested in achieving laughs than cohesion, largely ignoring its source material to play up its R-rated license to be vulgar and idiotic.

That the world needed a “CHiPs” movie is open for debate, but Shepard is committed to making the worst one imaginable. Gone are procedural adventures on the freeways, focused instead on Ponch’s secretive mission to identify Vic and his gang, with the only true patrol pullover highlighting a police charity donator (Ed Begley Jr.) speeding without remorse, with the gag being he’s playing Toto too loud during the traffic stop. Humor found in the rest of the feature isn’t much more ambitious, depicting Ponch as a sex addict who requires multiple masturbation stops during the day (yoga pants being his kryptonite), while Jon is a former daredevil whose broken body requires hourly mouthfuls of medication, and comes to a complete stop during one rainy day, with Ponch required to carry his naked partner from his bedroom floor into a nearby tub to loosen his joints. This scene is important as it’s one of several that uses sweat-inducing gay panic for comedic emphasis, with the production pretending it isn’t 2017 — to quote the 1974 sci-fi puzzler, “Zardoz”: “The gun is good, the penis is evil.” Shepard’s screenplay is hoary and lame, trying to appeal to red-blooded American males with ample displays of nudity, bullets, and bikes, pretending it’s Straight Dave drive-in entertainment and not a screen adaptation of a popular NBC show intended for a family audience.

“CHiPs” has difficulty with spatial relationships, finding editing by Dan Lebental a mess at times, often working without proper camera coverage. Co-stars (like Rose Salazar, playing Jon’s weirdly determined love interest) are too passive and tiny to be credible as bulldozing cops, while method actor D’Onofrio clearly never consulted with Shepard on tonality before cameras rolled. Action is oddly limited to a few hot pursuits, lacking the recklessness and propulsion one would expect from a police patrol feature where one character is an X Games legend. And chemistry is seriously lacking between Shepard and Pena, with both actors trying to be the shining star of an easily winded make-em-up comedy, filling the effort with leaden punchlines.

How bad could “CHiPs” be? There are more references to analingus than there are motorcycle chases. How Shepard managed to sneak that nonsense past his investors is worthy of its own investigative documentary. The original show wasn’t exactly “Law & Order,” but it had some heart, plenty of lawbreakers and goofiness, and a memorable team dynamic. Shepard’s vision for the franchise is barely coherent and written in Crayon.