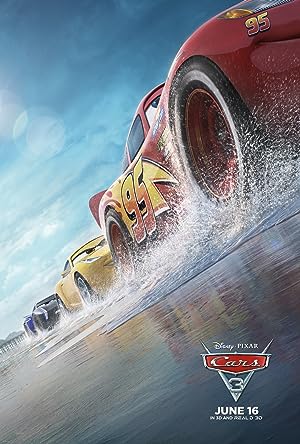 Blindsided by a new generation of blazing-fast racers, the legendary Lightning McQueen is suddenly pushed out of the sport he loves. To get back in the game, he will need the help of an eager young race technician with her own plan to win, inspiration from the late Fabulous Hudson Hornet, and a few unexpected turns. Proving that #95 isn’t through yet will test the heart of a champion on Piston Cup Racing’s biggest stage! Written by Pixar

“Cars 3” is the apology for “Cars 2” we all deserve. Not that 2006’s “Cars” was an amazing achievement in animated entertainment, but “Cars 2” was built almost entirely out of bad ideas, with Pixar so concerned with taking the franchise in a fresh direction, it forgot what was modestly appealing about the material to begin with. Recognizing a swing and a miss, Pixar rebounds with “Cars 3,” which eliminates the gratuitous violence and slapstick antics of bumbling tow truck Mater to return to the essentials of Lightning McQueen race world anxiety. Director Brian Fee (taking over for John Lasseter) knows exactly what he want from the second sequel, keeping the picture stuffed with likable characters, mild tests of integrity, and a sustained examination of aging, preserving a circular arc of maturity that picks up where “Cars” left off.

Enjoying his time as a hero of the racing circuit, Lightning McQueen (Owen Wilson) is happy to share his fame with his Radiator Springs pals, including girlfriend Sally (Bonnie Hunt) and best friend, Mater (Larry the Cable Guy). Coming out of nowhere to make McQueen feel obsolete is next-gen racer Jackson Storm (Armie Hammer), whose arrogance matches his incredible speed. After enduring a massive car wreck that almost ends his career, McQueen pulls back to rehabilitate, sent to the Rust-eze Racing Center to work on his fundamentals. McQueen is paired with Cruz Ramirez (Cristela Alonzo), a racing trainer who has faith in her client, but can’t get him up to speed. Hoping to return to his life, McQueen works on his focus, trying to summon the legacy of Doc Hudson (Paul Newman) to inspire his return to racing. However, the road to redemption isn’t easy, with McQueen learning his true place in professional racing, confronting his age and his experience on the track.

Think of “Cars 3” as the “Indiana Jones and the Last Crusade” to “Cars’” “Raiders of the Lost Ark.” Not quality-wise, of course, but as producer backtracking after a wild franchise experiment that didn’t go as well as planned, with the creators scrambling to reclaim what was lost by returning to the creative elements that made the original effort so beloved. Instead of continuing Mater’s spy game from “Cars 2,” the new film gently pushes the buck-toothed tow truck to the background, returning him to the supporting character he was originally intended to be. The picture also makes a visit to Radiator Springs to see the old gang, with Sally returning to a position of support for McQueen. Certainly a talent such as Hunt deserves more to do, but it’s nice to have Sally back in the action, even in a limited capacity.

“Cars 3” returns to McQueen’s saga as a top race car, only now the red speedster is experiencing a mid-life crisis, with his dominance on the track challenged by the next generation of supercars, leaving the Rust-eze spokesman in the dust. A horrible accident takes McQueen out of the season, but mentally, he’s already retired, struggling with Storm’s taunts and the disappearances of his contemporaries, who are all being replaced. Perhaps it’s not an exhaustively emotional journey for the sequel, but the psychological aspects of “Cars 3” work, following McQueen as he confronts his issues, which are tied to the loss of Doc, whose aborted racing legacy closely resembles McQueen’s. It’s wonderful to hear Newman in the role again (the production employs old voice recordings from “Cars” to bring Doc back to life for flashbacks), and the character plays an unexpectedly pivotal role in the feature, with McQueen eventually seeking out help from Smokey (Chris Cooper), Doc’s former crew chief, who’s full of memories about the legendary Hudson Hornet.

Also making a positive impression in “Cars 3” is Cruz, a racing technician with stifled track dreams of her own. Cruz breaks up the boys club atmosphere of the movie, and Alonzo provides wonderfully engaged voice work, providing dramatic balance for picture. Certainly Cruz’s character arc is predictable, but familiarity is the “Cars 3” thing, with subtle adjustments to the stakes as McQueen comes to understand the frustration his assistant is feeling, recognizing her need for speed. Cruz also participates in the film’s best sequence, joining McQueen as the pair goes undercover to a rural race track, accidentally signing up for a battle royal at a figure 8 race, where they face off against the hulking school bus, Miss Fritter (Lea DeLaria).

Like the previous installments, “Cars 3” is gorgeously animated, with Pixar inching closer to their dream of photorealism, startling with a montage of American interstates as Mack brings McQueen and Cruz to Florida for the grand finale. Voice work is terrific as well, finding characters defined and amusing. Length remains a problem for the series, with Pixar continuing to believe 100 minutes is an appropriate run time for 80 minutes worth of story, but at least “Cars 3” provides more entertainment value, a pleasant message on personal value, and a few cheer-able moments of conflict. The “Cars” franchise was never a highlight in the Pixar oeuvre, but with this second attempt to expand the world, the pieces fit, giving fans what they want, and doing so with style, heart, and less Mater.