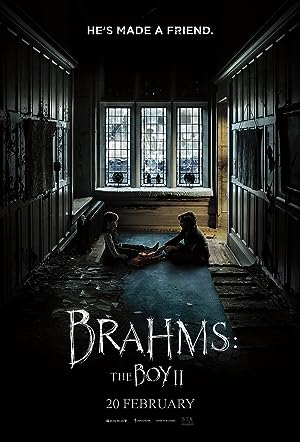 Living a happy life with her son, Jude (Christopher Convery), and workaholic husband, Sean (Owain Yeoman), Liza’s domestic peace is destroyed when she’s a victim to a violent home invasion, with Jude traumatized by the event. Now non-verbal, communicating through writing, Jude’s behavior disturbs Sean, who decides to relocate his family to a guest house near the Heelshire Mansion, giving a rattled Liza a chance to settle her fears. While on a nature walk, Jude uncovers the doll Brahms, who’s buried in the dirt, granted a chance to keep the toy as a companion by Liza, who’s looking to reach something emotional inside of her son. However, instead of playtime, Jude becomes obsessed with Brahms, who communicates with the kid when they’re alone, presenting a list of rules for his care. Liza, unnerved by such companionship, tries to get to the bottom of Brahms’s history, watching Jude’s anger rise. She also keeps a close eye on neighbor Joseph (Ralph Ineson), who seems to know a thing or two about the doll.

Trauma is the theme of “Boy II,” with Liza’s mental stability shredded by the home invasion, where she’s assaulted in front of Jude, who’s powerless to help. She’s soon saddled with paranoia and vivid nightmares, while Jude loses his voice altogether, also put on a tight schedule of therapy sessions, which continue over FaceTime when the family relocates to the middle of nowhere. It’s not an especially inspired plot from Menear, who simply needs a reason to get a child to the cursed estate, with Jude soon finding Brahms in the ground, bonding with the porcelain companion, bringing the toy inside the house to live. Of course, the concept of “The Boy” was that the doll was something of a lifeless avatar for a more demented evil hiding in behind the walls of the estate, but “Boy II” does away with that, changing Brahms into a dark spirit who soon takes possession of Jude, causing problems around the house while the nervous child takes all the blame.