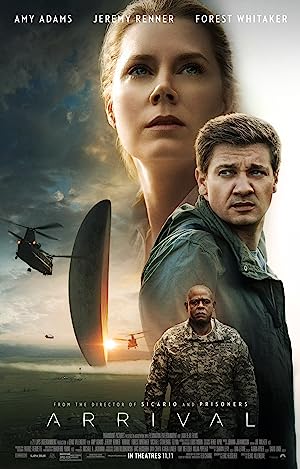 When mysterious spacecraft touch down across the globe, an elite team – led by expert linguist Louise Banks – is brought together to investigate. As mankind teeters on the verge of global war, Banks and the team race against time for answers – and to find them, she will take a chance that could threaten her life, and quite possibly humanity.

Denis Villeneuve makes a specific type of movie. The director of “Prisoners,” “Enemy,” and “Sicario,” Villeneuve takes his fondness for the stillness of cinema to the sci-fi realm, assuming command of “Arrival,” which is an adaptation of a short story by Ted Chiang (scripted by Eric Heisserer). While the picture is technically an alien invasion tale, “Arrival” strives to be much more than the average disaster film. It’s intelligent and challenging, questioning time itself between exhaustive examinations of language and meaning. It’s introspective instead of demonstrative. It’s a fine effort, but incomplete, and that’s the way Villeneuve likes it. He’s a made a feature that enjoys questions, not answers, taking on the grand spectacle of visiting aliens in towering spaceships with more of an episodic approach, creating a viewing experience that’s filled with as much frustration as it is with awe.When 12 alien ships arrive on Earth, they position themselves around the globe, hovering over different countries. Brought to Montana to help Colonel Weber (Forest Whitaker) deal with the possible threat, linguist Louise (Amy Adams) is tasked with understanding and communicating with the aliens, eventually known as Heptapods. Granted an audience with two Heptapods every 18 hours, Louise and mathematician Ian (Jeremy Renner) are startled to interact with giant squid-like creatures who have something to share with the humans, but speak in an advanced ink-based language, making their ultimate reason for traveling to Earth almost impossible to decode. While world leaders begin to lose their patience with the alien presence, fearing the Heptapods are here to wipe out humanity, Louise and Ian work to figure out a common language, with the linguist particularly sensitive to the Heptapod message, forced to reprocess the loss of her teenage daughter to illness to make a mind-bending breakthrough.

While “Arrival” doesn’t indulge a galactic war with zooming spaceships and burning cities, it does embrace a traditional opening, introducing the alien ships (nicknamed “shells”) in spectacular fashion. These towering gray vehicles float ominously over land, drawing crowds of onlookers and a firm military barrier, controlled by Weber. They open up every 18 hours, granting access to brave souls willing to enter the Heptapod ship and try to communicate with creatures that reside behind a glass-like barrier, floating in gas, using their tentacles to create ink circles with specific meaning. For Louise, the opportunity to participate in such a momentous event is impossible to pass up, pulled out of her mournful funk to take part in a language challenge that’s befuddled world experts. The opening act of “Arrival” is riveting, setting up initial contact with stunning suspense, practically feeling Louise’s heartbeat as she enters the Montana shell with Ian, watching Villeneuve capture every tense step, deep breath, and visual discovery as alien contact goes from fantasy to reality.

What actually happens inside the shell is best left unexplained. Exploration is a big part of “Arrival,” and Villeneuve maintains surprises throughout, some pertaining to gravity and personality. The main focus of the story remains on Louise and memories of her daughter, which infiltrate her dreams, pushing the linguist in a direction she doesn’t immediately understand. Louise also deals with the deconstruction of the Heptapod language, working day and night to make sense of the ink symbols, with a ticking clock established by Agent Halpern (Michael Stuhlbarg), a government stooge who’s eager to follow China and Russia’s lead and take down the shell with firepower, fearing the aliens are planning an attack. “Arrival” is procedural at times, taking in the controlled chaos of the military outpost, highlighting how Louise and Ian bond in their shared respect for education, facing off against hesitant types who turn to violence to solve this global riddle. However, instead of creating a flow of experiences, the screenplay jumps around days in the journey, which doesn’t inspire sustained tension and makes subplots feel random, including the development of nervous soldiers secretly brewing their own explosive plan to deal with the growing Heptapod influence. In a movie that’s seemingly interested in an original take on an alien invasion story, this is a painfully contrived detour.

“Arrival” begins to feel uneven in its second half, less interested in creating a possible resolution to everything it introduces, resembling Christopher Nolan’s “Interstellar” in the way it goes beyond space and time to wow audiences. The feature weirdly doesn’t become more interesting as it unfolds, it grows more distant and protracted, which has become a Villeneuve specialty. “Arrival” leaves more questions than answers, but what’s more frustrating about the picture is how it doesn’t seem to understand its greatest power doesn’t come from riddles, but its characters, with the military and scientists eventually becoming secondary to a Big Idea that isn’t satisfying. This is an artfully made effort, with a humdinger of an introduction, but once it becomes clear where it’s headed, it becomes more about selling a trick than detailing a thrilling awakening.