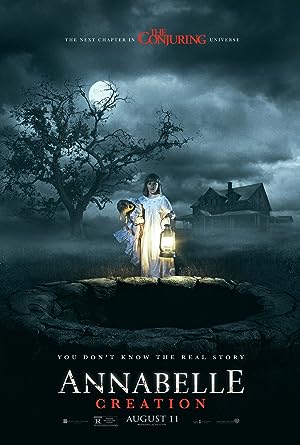 Annabelle: Creation (2017)
109 min|Horror, Mystery, Thriller|11 Aug 2017
6.5Rating: 6.5 / 10 from 136,717 usersMetascore: 62
Twelve years after the tragic death of their little girl, a doll-maker and his wife welcome a nun and several girls from a shuttered orphanage into their home, where they become the target of the doll-maker's possessed creation, A...
Director: David F. Sandberg
Creator: Gary Dauberman
Actors: Anthony LaPaglia, Samara Lee, Miranda Otto

Having lost their daughter, Annabelle, to a horrible accident, grieving parents Samuel (Anthony LaPaglia) and Esther (Miranda Otto) decide to fix their anguish by providing shelter for an orphaned group of young girls, joined by Sister Charlotte (Stephanie Sigman). The youngest of the children are Linda (Lulu Wilson) and Janice (Talitha Bateman), who’s dealing with the crippling effects of polio, putting distance between her and her able-bodied roommates. With Samuel a retired doll maker, Janice enters a forbidden room one night and discovers one his creations, which resembles his dead child. Witnessing the strange ways of the doll, Janice is gradually unnerved by her time in the house, fearing the toy is coming after her. Resistance soon fades into compliance, with Linda growing aware of Janice’s odd behavior, which begins to expose a darker force within the doll that’s aching to come out.

We rarely see this type of excavation when dealing with a Hollywood franchise, but “Annabelle: Creation” is a prequel to 2014’s “Annabelle,” which was a prequel to 2013’s “The Conjuring,” which has already spun off a sequel in 2016’s “The Conjuring 2,” and currently awaits another prequel in 2018’s “The Nun.” Phew. And yet, through the haze of industry universe building (“The Conjure-verse”?), “Annabelle: Creation” arrives relatively unscathed, defying the odds to be an effective chiller that’s excitedly performed and sensationally directed by David F. Sandberg. That the movie works at all is miraculous, considering what a dud “Annabelle” was, but the helmer stays grounded with this return to the antics of a possessed doll, playing with sound and imagery wonderfully, while trying to restore elements of demonic influence that made the original “Conjuring” such a treat for genre fans.

To be fair, “Annabelle: Creation” wouldn’t exist without “Annabelle,” as the production enjoys plenty of franchise hindsight, trying to create something darker and more definitive to frighten audiences. It’s the actual origin story of the doll, which doesn’t start out as malevolent force, but as an exclusive toy from Samuel, a limited edition release from an expert dollmaker, who pours his love into his work and child, enjoying games of hide and seek inside the house, delighting Esther as well. They’re doting parents, and they’re ruined when they lose the little girl to a car accident, robbing them of the peaceful domesticity they’re accustomed to. The time gap between the death and the arrival of the orphans is the mystery of “Annabelle: Creation,” and it’s a good one, with screenwriter Gary Dauberman (who also scripted “Annabelle”) turning the house and its many rooms and hiding spaces into a battleground between spiritual forces (crosses, inverted and traditional, are a visual motif), with the doll inspiring all kinds of trouble for everyone, with specific designs on Janice.

Sandberg made a strong impression with 2016’s “Lights Out,” an inventive, hearty chiller that played with cinematic construction and profound psychological issues. In a genre that doesn’t ask much of its filmmakers, Sandberg made something interesting, and he does it again here, handed an impossible task of returning to an evil doll whose mystique has already dried up. Sandberg crafts a sinister feature, but also deliberate, taking things slowly as characters are introduced and Janice’s isolation takes shape. The helmer is terrific with his actors, getting natural, excited performances out of Bateman and Wilson, who work the hardest when it comes time to convey household panic. Sandberg also builds an impressive sound and light show, delivering a pure cinematic punch as wicked business arrives, with darkness and eerie thumps keeping Annabelle mobile, establishing a connection to Janice, rejecting others with her cold, dead stare. “Annabelle: Creation” doesn’t necessarily color outside the lines when it comes to scares, but Sandberg’s traditional approach, building dread with stillness, works wonderfully here, achieving real suspense while giving the doll a truly unnerving presence.

A few issues plague “Annabelle: Creation,” which runs longer than it needs to, including the addition of a superfluous epilogue that ties the prequel into the larger “Conjure-verse” (more effective is a subtle tease for “The Nun,” as Sister Charlotte shares an eerie photo of her mission work overseas). It starts to feel stale when it should deliver a killing blow, but it’s easy to forgive Sandberg’s reluctance to conclude the nightmare, especially when he’s having so much fun dreaming up ways for evil to take form on the ranch. It would nice to have the series continue to deliver quality work like “Annabelle: Creation” (a shoo-in for a best picture award from Pre-Teen Birthday Sleepover Magazine), and while that seems unlikely, at least there’s one chapter of this iffy franchise that works as well as “The Conjuring.”