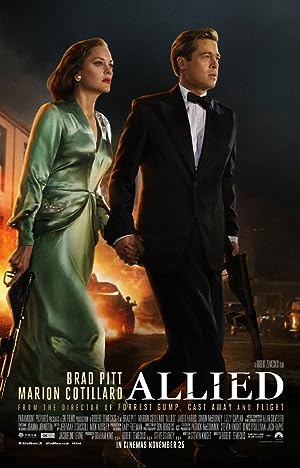 In the middle of World War II, in turbulent 1942, a plane flies over Morocco and drops a Royal Canadian Air Force paratrooper who comes in to land on a drop zone, somewhere in the desert dunes outside Casablanca. Just in time before anyone notices him, the fearless Wing Commander Max Vatan gets in a car and heads to the town with orders to meet Parisian Marianne Beauséjour, a skillful member of the French Resistance. On a mission to assassinate the German Ambassador in Casablanca, the two operatives must convince every one of their true feelings as a married couple, while in the background, they need to make the necessary preparations for the critical soirée. Without delay, after the success of this suicide mission, Max and Marianne flee together to England with plans on marrying and making a family, regardless of the war. I

After taking cinema to literal heights with last year’s 3D experience, “The Walk,” director Robert Zemeckis returns to Earth with “Allied,” an unexpectedly moderate espionage thriller from a helmer known for his love of big screen mischief. Technical wizardry remains in the picture, but Zemeckis is respectful of Steven Knight’s screenplay, which takes a chilling look at the vows of marriage and the mercilessness of war. “Allied” has its thrills and spills, and its command of WWII visuals is superb, keeping period mood a supporting character. It’s not the most thrilling feature, going slow-burn to maintain as many secrets as it can. The reward for such patience is an effective mystery with a very strong sense of sexuality and romance, working to redefine wartime warmth with a hearty dose of paranoia.

Landing in Casablanca, Canadian intelligence officer Max (Brad Pitt) is paired with French spy Marianne (Marion Cotillard), tasked to play husband and wife as they prepare to assassinate a German leader during the early years of World War II. Playing specific domestic roles, lines are blurred by palpable chemistry, with Max hesitant to fall in love with Marianne, denying their compatibility. When the mission is a success, Max proposes to Marianne, with the pair welcoming a daughter into the world and trying to make a life for themselves in war-torn Britain. Still tied to military duty, Max balances his domestic duties with Marianne, maintaining their marital journey during a tumultuous time. Floored when his superiors deliver an accusation that Marianne is actually a Nazi spy, Max sets out on his own investigation, hoping to prove his wife’s innocence in the 72 hours he’s been gifted to keep an eye on her before he has to kill her.

“Allied” is being marketed as an actioner, in the same vein as “Mr. & Mrs. Smith,” with publicity materials focusing on guns, sex, and explosions. It’s not that movie. In fact, violence isn’t even part of the picture until the halfway point, leaving a full hour to characterization as we meet Max, who’s introduced as a shadowy figure parachuting into the vast desert, walking patiently to a rendezvous point, where he learns that Marianne is portraying his wife in Casablanca, already making an impression on the Nazis collected there, selling the wonderfulness of her phosphate-selling spouse. When they finally meet in a club, sparks fly, but it’s not clear how authentic the attraction is, with both spies playing their part perfectly. Knight’s primary weapon is reality, using the wartime effort to toy with emotions and actions, allowing the audience to decode through performance whether or not Marianne is working to generate plausible heat with Max out of lust or military duty. For that first half, “Allied” doesn’t raise its pulse rate, building familiarity with the couple (who communicate in French and English) during their long road to a planned assassination at a Nazi gathering of the elite.

Perhaps this stillness to “Allied” is going to surprise many viewers, but this isn’t a dull picture. It’s exact in its construction of personality and suspicion, with Max’s guard slowly lowered around Marianne, who wants to know more about his postwar plans, strengthening their bond. Sex eventually enters the equation, during a desert sandstorm to accentuate the volatility of the pairing, transforming Max and Marianne into an actual couple, which isn’t a bright idea in the spy business. While Zemeckis stages a violent disruption to juice up the movie, pitting the twosome against waves of scrambling Nazis as they exit the party, “Allied” returns to more cerebral activity in its second half, where domestic tranquility is sprayed with acid after a top government official (Simon McBurney, in a killer cameo) orders a “blue dye” operation, forcing Max to suspect Marianne of being a sleeper agent for the Nazis, disrupting everything he knows about his life. The script evolves into investigation mode, following Max’s three-day effort to find someone who knew Marianne early in the war, helping to pinpoint her identity before he’s forced to kill the mother of his child.

“Allied” isn’t a fingernail-chewing viewing experience, but Zemeckis maintains atmosphere with wartime events, playing out tensions between Max and Marianne at home while the sky over London burns with battle. The helmer also does away with his typical bravura camerawork, electing to support Knight’s timing and psychological depth instead of amplifying cinematic possibilities, which also benefits the performances, finding the weight of the effort put on Pitt and Cotillard, who successfully connect as a couple, especially when the pairing is poisoned by doubt. “Allied” is for patient moviegoers, blending classic cinematic suspense with a long road of characterization. While it provides exceptional nuance and prolonged agitation, it doesn’t offer many overt thrills, going against the Zemeckis way. However, it’s a strong picture in design and escalation, earning its transformation into an askew love story with a chilling but appropriate conclusion.