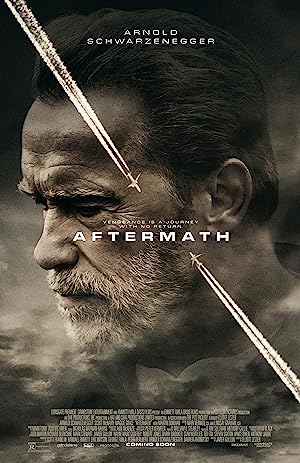 A construction foreman living a happy life in Ohio, Roman (Arnold Schwarzenegger) is preparing for the return of his wife and pregnant daughter, who are traveling from Kiev, arriving home for the holidays. Instead of a warm reunion at the airport, Roman is informed that the flight he was expecting has crashed into another plane in mid-air, killing everyone onboard. Jacob (Scoot McNairy) is the air traffic controller in charge of the local skies, and during a rare moment of distraction, he fails to prevent the disaster, leaving him a wreck of guilt and shock. Unable to deal with wife Christina (Maggie Grace) and young son Samuel (Judah Nelson), Jacob is subjected to prolonged, detailed inquiries, draining him of his will to live. For Roman, the loss is crippling, trying to make sense out of unnecessary deaths with an airline that refuses to apologize for their catastrophic mistake. Unwilling to be shooed away with settlement money, Roman decides to learn more about Jacob, dealing with his grief through anger.

Returning to acting after his stint as the governor of California, Arnold Schwarzenegger has endured some difficulty getting his big screen mojo back. His post-political career has fired a few blanks (including “Terminator: Genisys” and “The Last Stand”), but his acting has improved, and Schwarzenegger is finally at a place where he’s willing to take some creative chances with difficult material. In 2015, there was “Maggie,” a grim zombie saga that was more about the pains of parenthood than brain consumption. Now there’s “Aftermath,” a stark drama that examines the tunnel vision of grief and initial instincts for revenge. However, it’s not an action picture pitting Schwarzenegger against a formidable foe. Instead, director Elliot Lester (“Blitz”) and screenwriter Javier Gullon deliver a waking nightmare of guilt and confusion, cutting deep into complex emotions without the safety net of ultraviolence. It’s an engrossing study of despair.

Inspired by the saga of a 2002 German mid-air collision, “Aftermath” paints with primary colors during its opening act, using simplicity to establish its characters before their worlds are turned upside down by tragedy. Roman is a man with a terrific work ethic and leadership skills, and he’s a proud grandfather, eagerly awaiting the birth of his first grandchild, with a room in his house already decorated in anticipation of the new addition. It’s Christmas time, and he’s excited to pick up his family, arriving at the airport with a skip in his step, clutching flowers for the ladies he loves. Jacob is a happily married father of one, enjoying a comfortable home life with Christina and Samuel, showing pride in his domestic accomplishments and ease with his work requirements, slipping into “pushing tin” mode at the airport, where difficulties working with a broken phone lead him to neglect communication efforts through a headset. A sense of joy is quickly snuffed out in “Aftermath,” with both Roman and Jacob subjected to the most terrifying realizations of their lives.

The screenplay tracks the air disaster outcome for both men, with Lester skillfully juggling perspectives as Roman and Jacob embark on different odysseys of personal awakening. Roman remains in a state of shock, and in one harrowing sequence, he talks his way into a volunteer position at the crash site, finding the mangled bodies of his loved ones. Jacob is plunged into depression, losing touch with reality and testing the idea of suicide, buying a gun and procuring pills to bring finality to his own psychological suffering, unwilling to live with the pain he’s caused. “Aftermath” is dark, and while it doesn’t touch on easy answers, it offers a reasonably realistic depiction of dueling torment, keeping the characters separated for the first two acts of the effort, building up the potential for a showdown that’s more about desperation than heroism.

“Aftermath” escalates tension wonderfully, sending Roman to visit slimy lawyers trying to buy his silence, and Jacob is pushed to acquire a new identity and life for himself, slowly buying into a corporate declaration of innocence. There’s also an exceptional turn from Schwarzenegger to study, showing a different side of himself as Roman, who’s lost in pain, growing obsessed with the accident and the acquisition of justice through a basic apology, which never comes. Now an older man, Schwarzenegger has the right maturity for the role, and the script merely demands vulnerability, not the flexing of muscles. He’s matched well by McNairy, who portrays final exit agony with precision.

“Aftermath” is strong stuff, but it’s meditative enough to welcome a viewing, inspiring interest in the characters and their ultimate destination. The picture also has valuable ideas to share on the cycle of violence and its futility, concluding intelligently, leaving the audience with a concept of revenge that’s upsetting, not rousing. It’s subversive work with Schwarzenegger and his legacy of brawn around, allowing “Aftermath” to pack quite an unexpected punch.