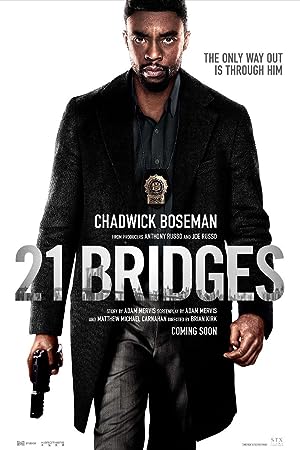 
Andre Davis (Chadwick Boseman) is a legacy New York detective whose father was murdered when he was a young man. In a decade of service to the city, he has a track record of killing criminals and asking questions later. He has no regrets, and he seems like the right man for the job to hunt down two hired guns, Michael Trujillo (Stephan James) and Ray Jackson (Taylor Kitsch), who, when pulling off what should have been a quick, quiet, in-and-out snatch and grab drug heist, find themselves mowing down NYPD officers who just so happened to casually, and curiously, be at the same place at the same time. As they run through the city in search of escape, Manhattan is put on lockdown on Davis’ suggestion.

Every bridge is closed, tunnels are blockaded, and transit systems are taken offline. As Davis and fellow officer Frankie Burns (Sienna Miller) hunt down the killers, he comes to realize that there’s much more to the night’s bloody events than a high stakes robbery gone wrong.

21 Bridges builds a dual perspective story, following both ends of the crime: the pursuers and the pursued. The film gives much screen time to the interplay between and the dramatic resonance sourced from those who committed the crime and find themselves on the run from the law. They are not secondary characters but rather critical story drivers for the duration. Their backstories, albeit being relatively basic, are developed throughout and how and why they fit into the larger story is explored through, primarily, the second act.

Act three follows largely in the manhunt’s aftermath, as the larger truth behind the robbery unravels. Emotions run hot on both sides of the frenetic unfolding drama, which only rises in intensity as the tale becomes more entangling and the slowly revealing truths threaten to shift the entire dynamic in true 180 degree fashion.

The film’s dynamic takes shape within the established prism that paints Davis as a man who is not hesitant to pull the trigger. But when he believes one of the suspects holds valuable information that’s worth more than a feel good, and justified, bullet to the brain, he stops at nothing to make sure the perp doesn’t die before he can talk. And his self control might just be the answer to unraveling a much larger story.

Boseman, who rose to prominence playing Jackie Robinson in 42 and who has since become a household name portraying Black Panther in the Marvel Cinematic Universe, brings an understated emotional core to the character who is tasked with leveling his instincts and coming to terms with his history. The part is not a major challenge for the actor, which tasks him with more physicality than emotional upheaval, but he solidifies the film’s approach to answering larger questions than bullets can solve.

He, and the film, are stymied by somewhat predictable content that’s been seen countless times in other films but Boseman and an impressive supporting cast do give the film a fair shake. Paired with the well-rounded filmmaking, 21 Bridges works as a violent and entertaining ride, even if it’s decidedly without much, if any, replay value.