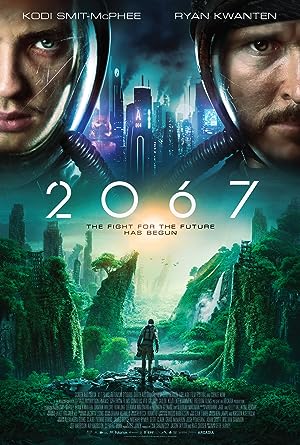 In the year 2067, Earth has been decimated by environmental issues, leaving the survivors to depend on synthetic oxygen provided by Chronicorp, which is run by Regina (Deborah Mailman). Ethan (Kodi Smit-McPhee) and brother Jude (Ryan Kwanten) are employed by the corporation, working in the bowels of the city to restore power sources for the dwindling populace. Coming home to wife Xanthe (Sana’a Shaik), Ethan is troubled by her health as she starts to succumb to “The Sickness,” leaving her with little time left. Called in to meet with Regina, Ethan is exposed to the presence of Chronicle, a massive time travel device that’s presented a message to send the young man 400 years into the future to save humanity. Pained by his decision, Ethan agrees to take the journey, soon zapped to an empty futureworld, accompanied by his scanning device, Archie. Not sure what his mission is meant to be, Ethan tours the surrounding area, eventually finding a hidden facility and his own skeleton near its door, sending the traveler into panic.

Writer/director Seth Larney offers some gloom and doom for today’s audience with “2067,” which represents his attempt to create an epic sci-fi story about the end of the world. Missing from the endeavor is scale, with Larney losing budgetary dollars after an evocative first act, soon transitioning the tale into a time travel mystery, hoping to satisfy viewers with a brain-bleeder concerning one man’s visit to his future. The helmer isn’t exactly achieving anything original with “2067,” which starts off strong while focusing on a ruined Earth and a relationship facing an incredible challenge of separation. Larney can’t sustain what works well for the picture, which eventually becomes a video game-esque adventure that loses interesting elements of discovery as it goes on for much too long and without proper thespian support.

Larney provides a chilling introduction for “2067,” establishing the ruination of the Earth, which has been depleted of natural resources and most life, leaving those who’ve managed to survive reliant on synthetic oxygen to live with only a slight amount of comfort. Ethan is a working member of society, teaming with Jude to maintain the power supply, and Larney scratches a few “Blade Runner” itches with his early scenes, depicting a claustrophobic, deeply urbanized hellhole teeming with desperate souls living without hope. “2067” follows the sci-fi playbook, creating a megacorporation in Chronicorp, which has privatized breathing, sending reassuring advertisements of heath while enslaving the masses. And dramatic urgency is established with Xanthe, a kindly young woman who’s coughing up blood, putting Ethan on edge as he knows the end is near. Despite familiarity, the feature holds attention with its futureworld imagery and pressure points of work and air, while the tease of time travel is a decent one, giving the picture a slight “Stargate” tingle as Ethan faces transport into the unknown via a large circular machine.

Ethan eventually arrives 400 years into the future after dealing with Xanthe, believing his mission to be beneficial to her after being personally requested to come by an unknown entity. His trip is violent, but Earth has changed, becoming an empty world for the visitor to explore. It’s here where Larney changes the tone of “2067” to a mystery, sending Ethan into a new reality clutching Archie, his tech support, and wearing a special electronic bracelet his deceased father, Richard (Aaron Glenane), forced on him as a child. Daddy issues play a huge part in the script, portioned out as cut scenes, flashing back to Ethan’s traumatic upbringing, which involved Richard’s enigmatic lessons and his death. The rest of “2067” tracks Ethan’s progress with his mission, facing the ultimate riddle in evidence of his own death, and survival challenges occur as well, including the creation of fire and the acquisition of food.